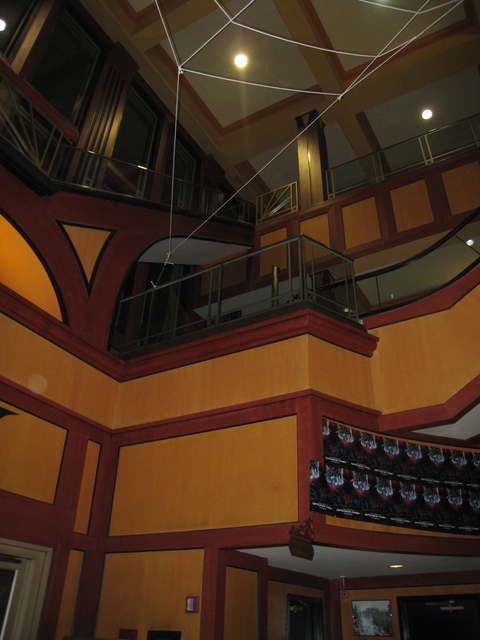 The Pacific Gaslamp 15 was a multiplex theatre located in the Gaslamp Quarter of downtown San Diego. It opened in November 1997 and had stadium seated auditoriums with a total seating capacity of 2,900. The building was designed by the firm of Benson & Bohl and was considered a model of downtown redevelopment. A review that I read calls this theatre “A multiplex with style”.

This is part of that review:

“So the cozy movie house is all but extinct. Hey, at least this multiplex has style! It is the grande dame of the Gaslamp’s matriarchy of Victorian buildings: Its Art Deco style "Puttin' on the Ritz” exterior is spectacular. In the lobby, the same kind of top-hatted poshness is achieved via lavishly patterned, thick carpets, “Gone With The Wind” staircases (inside it’s a two-story affair), and concession people dressed just like genuine riverboat gamblers whose fortunes have taken a bizarre turn".

In 2007 Reading International Inc. purchased 15 theatres within the Pacific Theatres chain in California and Hawaii, and on February 22, 2008 became Reading Cinemas 2010, it is operated by Reading Cinemas with the exception of the Hawaiian theatre which remained under the Consolidated Theatres banner.

The Reading Gaslamp 15 was closed January 31, 2016. The remaining theatres in the chain are only within the greater Los Angeles area, Orange County and San Diego.

On December 14, 2018, following refurbishment to the plans of architect Gulla Jonsdottir, it reopened as a dine-in theatre named Theatre Box with 8 screens and 815 seats. It is operated with collaboration with the TCL Chinese Theatre in Hollywood, CA. and Sugar Factory and was inspired by the traditional movie-going experience and a traditional theatre box filled with various treats.

This project was designed by BENSON & BOHL ARCHITECTS of San Diego, CA. For additional information on this and other B&B theaters, see www.bensonbohl.com

This is no longer the Pacific Gaslamp 15. It’s being called the Gaslamp Stadium by its new operator, Reading Cinemas.

This opened in November 1997

Life in the age of the ‘plex Gaslamp 15 looks like a movie house … now if it would just act and sound like one … It is called the Pacific Gaslamp 15 Theater and it has no gas lamps — or Ingrid Bergman in “Gaslight.” But it might be a gas, as Sinatra would say: 73,000 square feet including 15 theaters, with “wall-to-wall” screens up to 30 by 46 feet large, plus raked “stadium” seating, plush red seats, lights shaped like Academy Awards, digital sound and a lobby fit for a train depot — or a “popcorn

January 31, 2016: Closed for good tonight. Another piece of history.

And apparently it will get a new lease on life… with only 8 screens but a rooftop bar.