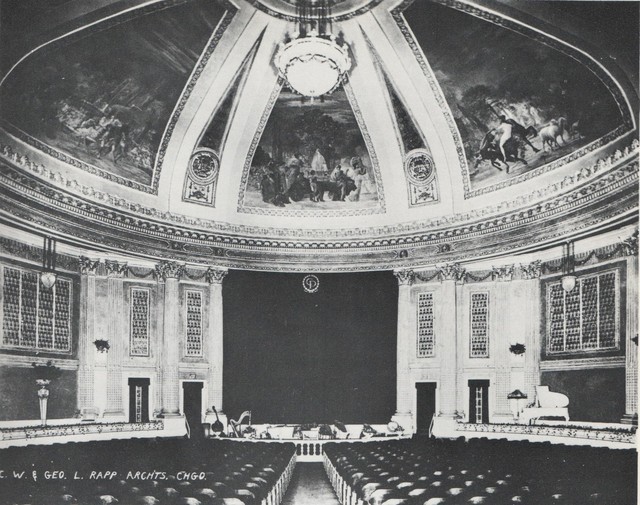 The Central Park Theatre was opened on February 10, 1917. It was equipped with a Berton 3 manual 9 ranks organ. “One of the most important extant theatres in Chicago,” according to Theatre Historical Society of America (Marquee magazine, Vol. 35, No. 1, 2003), the 1917 Central Park Theatre is the first cinema presentation house of the wildly successful and popular Balaban and Katz entertainment corporation. It is also the first collaboration of Chicago showmen A.J. Balaban & Sam Katz and the Chicago architects C.W. and George L. Rapp.“ In this theatre, Balaban & Katz first defined their style of presentation,” Marquee magazine states. “Its success gave rise to the beginnings of an entertainment empire which culminated in multiple movie palaces, market domination, and the successor organizations of Publix and Paramount.”

Following the tremendous success of the Central Park Theatre, Balaban & Katz built the Riviera Theatre, Tivoli Theatre, Chicago Theatre, Uptown Theatre and other theatres to house their style of cinema presentation (– all with architects Rapp and Rapp). After being a popular and profitable West Side cinema for decades, the Central Park Theatre was fortunate to receive the congregation of the House of Prayer, Church of God in Christ in 1971 under the leadership of Rev. Dr. Lincoln Scott. The congregation has grown to include adjacent buildings to accommodate food-service, counselling and transitional housing facilities, and to allow for the future growth of the church. Dr. Scott, his congregation and other community leaders are beginning a campaign to renovate the Central Park Theatre and the adjacent contemporary buildings, the combination of which will serve a variety of community social, spiritual and entertainment needs (2004). It is anticipated that the entire auditorium will be renovated, including the disused balcony, which is presently separated from the floor and mezzanine by a drop ceiling.

“The proscenium (replete with annunciator boxes), balcony and some original lighting fixtures survive behind the sanctuary walls,” according to Marquee magazine. It is interesting to note that two prominent books on American movie palaces, both by David Naylor, list the Central Park Theatre as demolished! At the same time, the building is absent from the “AIA Guide to Chicago.” However, native Chicagoan David Lowe (author of “Lost Chicago” and now of New York), in “Chicago Interiors, Views of a Splendid World” calls attention to the Central Park Theatre’s place in history. “The inauguration of the era of the movie palace may be marked by the opening in 1917 of Balaban and Katz’s 2,400 (sic) seat Central Park Theatre. The Central Park Theatre began the long, rewarding collaboration between Balaban and Katz and the architect brothers, Cornelius W. and George Rapp, who were eventually to design the Balaban mausoleum. The Central Park Theatre’s scenery, side stages, and curtain were created by Frank Cambria, a master of stage show design.”

What made the Central Park Theatre and its owners/operators/showmen so successful was the Balaban and Katz concept (initiated here by design) of presenting films (the same product its competitors had). However, they created a unique venue and style.

“The Central Park Theatre was designed to house by "Presentation Shows,” A.J. Balaban wrote via his wife in “Continuous Performance.” “It was to seat about 2,000. There was a moderate sized main floor and a good balcony. These were separated by a mezzanine floor of boxes. This horseshoe of boxes was the spectacular feature of the building. It was intended to give the audience the feeling of being part of a stage set. Added to the usual center one, there were two side stages, decorated like tiny gardens with greens and marble statuary. Here, singers (singly or in groups) could appear while the "Silent” was being shown on the center stage. Our colored stage lighting was extended to take in the whole house. The gently changing colors travelled from wall to ceiling, melting from soft rose to blue, lavender and yellow as they touched the velour of the seats, crystal of chandeliers, and the beautifully painted murals."

An interesting “Jazz Age” note is that Benny Goodman made his first professional debut playing the clarinet during of the Central Park Theatre’s jazz nights in 1921, according to Ross Firestone in “Swing, Swing, Swing: The Life and Times of Benny Goodman.”

It’s a hassle to write in the link HTML for everything when it can be copy-pasted just the same.

Harry Silverstein, about 25, was shot and killed at the rear of the Central Park Theatre on January 4, 1931. An ex-employee named Rappaport, 20, was on the back of the stage that night with electrician Herbert Imlach, Irving Riffkind and Robert Ross. About 8:30 P. M. a Bob Lewis approached Rappaport to say that Silverstein was outside and that Rappaport went to the stage door and that two shots were heard. Witnesses rushed down to see Silverstein grappling with Rappaport, who ran away to be apprehended at Mansfield, Ohio in February, 1935. He claimed self-defense, great fear of Silverstein, and a history of attacks by Silverstein from high school on combined with death threats without justification. Silverstein was 5'10" tall and weighed 180 pounds, while Rappaport was 5'5" and weighed but 115 pounds.

On the night of the homicide, Rappaport testified that he and some others played cards in the theatre for awhile and he later played solitaire. When made aware that Silverstein was present, he ran to the stage door, opened it and stepped into the alley where he was felled with a powerful blow and that they grappled; that the gun was in the pocket of his coat; that Troubles tore the pocket and the gun fell on the ground; that they both reached for it and in the struggle the gun was discharged; that he believed he was in danger of great bodily harm from Silverstein; that he did not see Ross, Riffkind or Imlach there at that time; that he left the gun on the ramp where it dropped after the shooting; that he immediately ran away, went to New York, assumed the name of Milton Stein, and traveled with a New York salesman through five or six states until he was arrested at Mansfield, Ohio. Riffkind testified that the noise of shots was a part of the picture then playing in the theatre.

The theatre is going to be restored. https://www.chicagobusiness.com/arts-entertainment/chicago-movie-house-central-park-theater-restoration-gets-new-push