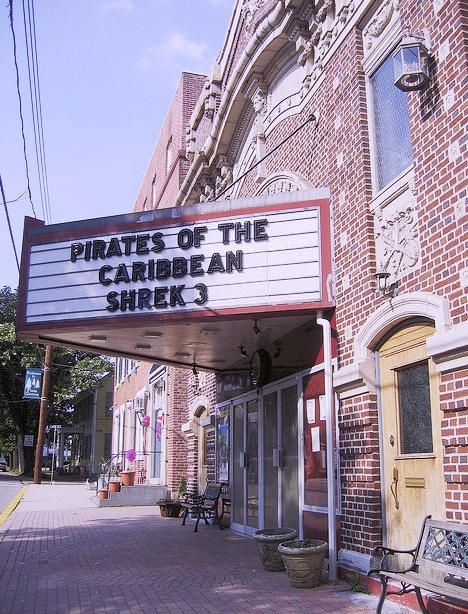 The Hippodrome Theatre was constructed in 1910 by Gregory Achenbach, father of Harvena Achenbach Richter, wife of noted author Conrad Richter, winner of the Pulitzer Prize and National Book Award. Vaudeville and other live productions were held on the stage in addition to movies being shown.

In 1935 the theatre was refurbished (probably to add sound) and the name was shortened to Hipp Theatre. It closed in the mid-1950’s. In October 1962, after a complete reconstruction (removal of the orchestra pit, balcony, and many exit doors) it reopened as the Pine Theater with “The Music Man”.

The theatre operated for seven days a week for a few years until going to weekends only. The upstairs was known as the Pine Terrace which hosted class reunions, wedding receptions, and banquests. Pine Terrace closed in the late-1970’s and the theatre began to deteriorate. It closed in 1999.

The Millers bought the theatre and completed refurbished it, removing some seats for handicapped access. Opening as Pine Grove Theatre in April 2001 with “Cast Away”, it began to host Pinegrove Historical Society programs, concerts, plays, and other live entertainment. It was closed in 2019.

I just caught Indiana Jones here (first run movies!) and was quite impressed. Of course, there was no direction to go but up from my last experience here in high school when the place was falling apart. The seats upstairs are a bit uncomfortable (I didn’t see the couches until we walked out), but $4 matinee ticket, great candy selection and the fact that they stocked Jones soda made up for it. Look forward to going again when I’m visiting family in town.

I was in Pine Grove in mid-August 2014 and the Pine Grove Theatre was showing first-run films.

I believe this one may now be closed. The phone is “disconnected no longer in service” and the website hasn’t been updated in nearly three months.