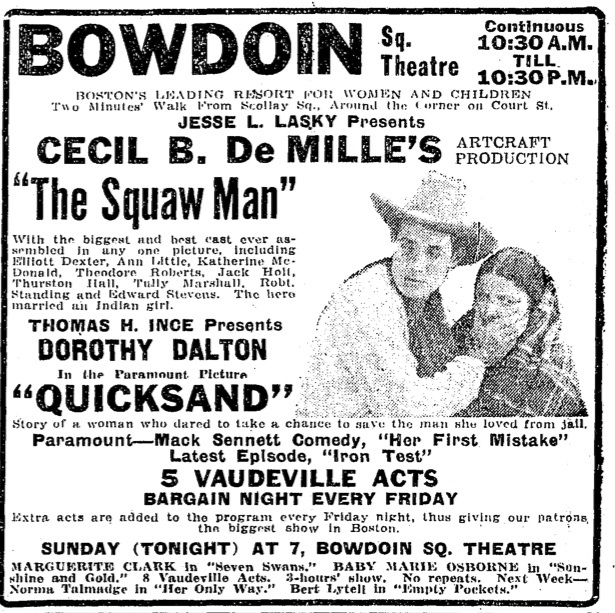 The Bowdoin Square Theatre was opened on February 15, 1892. The proscenium was 36ft wide and the stage 38ft deep. It started out as a vaudeville stage, but by 1914 was also screening movies as part of the program.

In the early-1960-s, nearly every building in Scollay Square, including all of its stage and movie theatres, was demolished to make way for Boston’s Government Center.

Note that the nearby Palace Theatre is also on the 1895 map, at Sudbury and Court streets, east side.

The Bowdoin Square Theatre is listed in the 1897-98 edition of Julius Cahn’s Official Theatrical Guide. The seating capacity is listed as 1,600. Admission prices range from 25 cents to $1. The theatre had both electric and gas lighting. The proscenium opening was 32 feet wide x 34 feet high. The stage was 40 feet deep. The theatre was on the ground floor and there were 10 places in the orchestra pit.

There is a rather long article entitled “Boston Theatres of To-Day” by Atherton Brownell in the Sept. 1895 issue of Bostonian Magazine. It has 2 photos of the Bowdoin Square Theatre, one exterior and one interior. Plus one sketch of the box office area in the lobby. It’s hard to tell, but in the exterior shot, the arch above the entrance appears to be open and not filled in. Th entrance was very fancy, but not very wide. It was at the left end of a building. The interior shot was made by someone standing in the right-front orchestra area looking toward the front portion of the left side-wall of the auditorium. It was quite ornate. The proscenium arch appears to be rectangular. Next to its left edge was a large arch with columns on each side. At the bottom of the arch were 2 big boxes on the orchestra floor. Above them were 5 small boxes which dropped like stair treads from the front of the first balcony down to the right end of the arch. At the top of the arch was a chandelier. Very nice auditorium, now gone for over 50 years.

This theater’s entrance and lobby were constructed in an existing building which dated back to at least 1860. In the book “Boston Then and Now” (Dover 1982) there are photos dating from 1860, 1925, and 1934. The theater entrance is missing from the first photo.

I was a junior-size movie goer in 1948, and the admission prices that dgidez quotes above are correct for a second-run movie theater like the Bowdoin. I usually paid from 15 cents – 25 cents for tickets at that time.

My father-in-law (95 yrs old) recently told us that he was about 13 years old (1932) when he would go to the theater in Scollay Square and watch the vaudeville shows. He eventually taught himself to tap dance and became a performer. He said he danced in-between songs by Buddy Clark. If you have ads or signs, I believe he said his name was on a few of them. His name is Samuel H. Brooks, it was probably Sam Brooks. I’ll try to get more information from him about the theatre if you like. What kind of info do you want? His memory is still pretty good but his speaking ability is slightly impaired from a stroke. We’ll see what we can do. I would love to get a bill or ad with his name on it, then he would be eligible to be put in the vaudeville/burlesque historical records.

In 1932 there were 4 theaters in this area wich featured live vaudeville acts in addition to movies:This theater, the Bowdoin Square Theatre; the Scollay Square Olympia Theatre; the Old Howard Theatre on Howard Street; and the Casino Theatre on Hanover Street. The Old Howard and the Casino were both primarily Burlesque theaters and may have had age restrictions, so that Sam Brooks, age 13, would most likely have attended the Scollay Square Theatre or the Bowdoin Square Theatre, or both.

I found an ad and a short article from August, 1934. The Gary Cooper movie “Operator 13” and five vaudeville acts were on the bill, with organists Arthur Martell and Vera Carlton at the console. I’ll post the articles in the photos section.