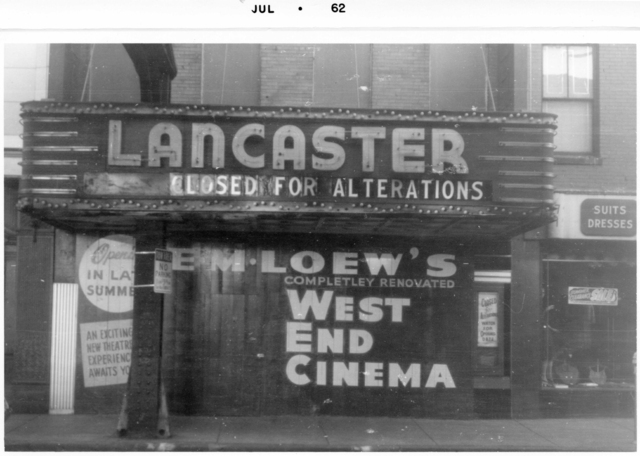 An old steeply-balconied theatre, the Lancaster Theatre was screening movies by 1926. It was remodeled in 1963 to the plans of architect William A. Reisman and re-incarnated as an art house, showing mostly new foreign films as well as revivals. It was renamed West End Pussycat Cinema on April 30, 1976, screening adult movies. It was located right near Boston Garden and North Station.

Why did they choose to rename the theatre ‘West End’ in 1963, years after the West End neighborhood was totally destroyed?

But remember it was replaced in the 60’s by a modern futuristic (at the time) new development, a shining “new” Boston rising from the old. I am sure in anticipation of the new upscale West End, the dumpy neighborhood Lancaster was “modernized” and reprogrammed to fit this new vision of the city.

True, but the name ‘West End’ was erased from the city’s geography. The new shining development wanted nothing to do with the name West End, preferring ‘Charles River Park’.

Perhaps there were trademark issues?

The area was stilled referred to as the “West End” after the widespread demolition and the construction of Charles River Park by the people who used to live there (patrons of the Lancaster) and others familiar with the area. Needless to say, plans to bulldoze the area created a firestorm back circa-1959 among the residents, who had no say in the matter. Caused a lot of lingering bitterness. For someone like E.M.Loew who had ties to the older Boston, it would have been natural to call the theater the “West End”. He also at the time of opening was under the impression that the elevated trolley structure in front of the new facade of the theater was to be shortly demolished, but that didn’t happen for a long while.

That didn’t happen until 2004, by which time this theatre was long gone ;–(

The Lancaster and Bowdoin Square were our neighborhood theaters in Boston’s West End. I never heard the Lancaster referred to as anything but the Lanci. The Lanci arrived in 1917, a year after my father got off the boat from Albania. He often mentioned that I wouldn’t believe the SRO crowds on Sundays. My sister has spoken of the neighborhood talent shows that were held there in the late 40’s and early 50’s. As a small boy, I recall seeing “Five Fingers” there, as well as “Red Mountain” and “He ran all the way.” It closed in the early 1950’s and re-opened in ‘53 with a cinema scope screen. The re-opening was a big day for the neighborhood. It was a Sunday and the place was jammed. The movie was “How to Marry a Millionaire,” and unaccompanied children had to sit in the balcony (I know because I was asked by a uniformed usher). My family became regulars again. In 1956, urban renewal forced us out of the area. With “The Best Things in Life are Free,” I bid farewell to the Lanci and the woman in the ticket booth.