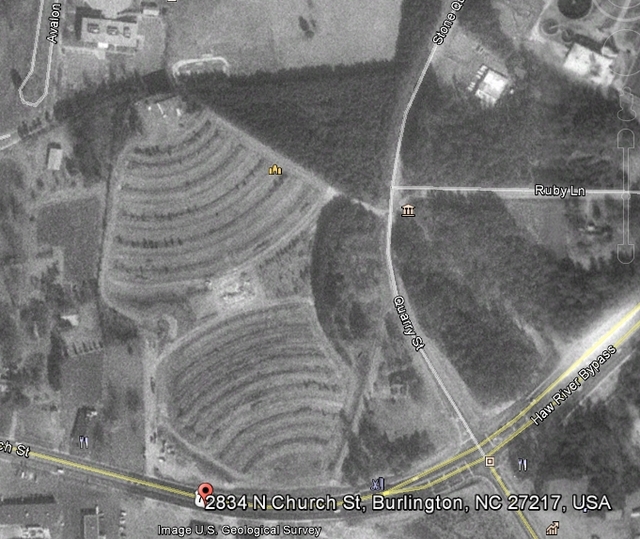 A classic drive-in once stood where a strip mall now stands. The 70 Twin Drive-In was on North Church Street (US 70) at the eastern edge of Burlington, NC. It opened as the Drive-In in May 1946. In June 1948 it was remodelled and reopened as the Burlington Drive-In. In July 1951 it was renamed Hi-Way 70 East Drive-In, later shortened to East 70 Drive-In. It was destroyed by a storm on June 8, 1969.

It was rebuilt and reopened as the 70 Twin Drive-In. It was operated by Consolidated Theatres. Closed in 1980 and used as a flea market for a while, it was demolished in 1991.

This drive-in was located at approx. 2834 North Church Street. One screen was where the shopping center is; the other where CVS is now located.

This o-zoner opened in May of 1946 as Drive-In Theatre aka Burlington Drive-In Theatre with an antiquated sound system and substandard grounds. The theatre closed for a major remodeling in 1948 re-opening June 4, 1948 with John Wayne’s “Pittsburgh.” The improved theater now had individual speakers, a concession stand and updated rest rooms. On October 29, 1949, the theatre changed its name to the Hi-Way 70 East Drive-In Theatre and then on July 16, 1951, the theater name was shortened to the East 70 Drive-In Theatre which it held on to until being destroyed in a storm closing to rebuild on June 8, 1969.

As the single-screen East 70 Drive-In, the theatre had many highlights including North Carolina’s first 3D showings on April 12, 1953 and giving away a 12-foot boot while celebrating the theater’s 10th anniversary in May of 1956. Plans were developed in 1969 to add a second screen and mother nature assisted that when the theater was decimated by a June 8, 1969 storm toppling its tower. The theater was closed until re-emerging as the 70 Twin Drive-In Theatre with “True Grit” and “Hello Down There” on Screen 1 and “Gone With the Wind” on re-issue on Screen 2.

The then-30 screen operation by Consolidated Theatre Circuit spent $500,000 on the twin. It would feature a game room with ten pinball machines, a pitch-and-bat arcade game, and a shuffle puck bowler. Pizza was added to the expanded concession area. And four-lane ticket booth added as the theater went from seeing fewer than 500 cars to around 1,100 on both lots. The 100' high and 60' wide metal screens had projection from X6000 Xenon lamp equipped “computerized” projectors.

The twins would stay in operation until reportedly closing in 1980 prior to the theater’s 35th anniversary. The space also hosted a weekend flea market that was popular in the area. The theaters were vandalized becoming an eyesore d until their demolition in 1991. Just traces of the roadway remained in the 2010s as a retail facility replaced the venerable o-zoner.