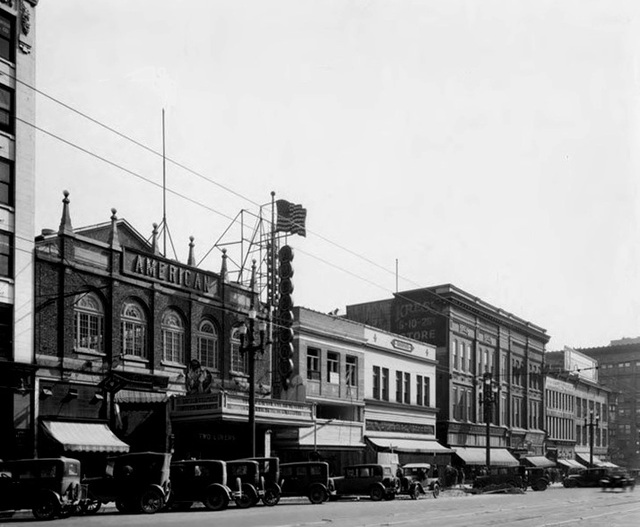 The American Theatre opened January or February 1913 with 3,000 seats. In 1928 it was remodelled in a Spanish Renaissance style to the plans of architect S. Arthur Shreeve, and reopened as the Granada Theatre on March 8, 1929. In addition to its balcony, the theater was known to have an upstairs ballroom.

The Granada Theatre was short lived and closed later in 1929. It was told to W.T. Grants’s and was converted into their department store which opened January 1930. That closed in the 1970’s and the building eventually demolished.

Could this have become the W.T. Grant downtown store? I remember years ago somebody saying that building had a ballroom upstairs, which I always thought was a strange thing for a Grant’s store to have.

Nice place.Who cleans it up? The Real spelling of Theatre is Theatre.But it works both ways!!!!Look at the old pictures it is always spelled theatre. But like the masks of old time Theatres one is happy one is sad.Thats show business!

The American was, indeed, the original name of the theater. It was constructed in 1912 and opened sometime between January and February of 1913. As mentioned in the article above, it was constructed at a cost of $150,000 by H. A. Sims of the Liberty Theatre Company, who by earlier accounts had been in the business since 1903. The Liberty Theatre company was made up primarily of bankers and businessmen from the area. The seating capacity was 3,000. The American had a 16-piece orchestra, conducted by J. J. McClellan, previously the organist of the Mormon Tabernacle. McClellan conducted from the $30,000 Kimball organ installed.

The American was taken over in June of 1928 by the American Theatre Operating Co. of Ogden, A. L. Glassman, president. The theater was extensively remodeled in the then-popular Spanish Renaissance style by Arthur Shreve of Ogden. It re-opened as the Granada on March 8, 1929, with sound film equipment installed. The re-opening feature was THE IRON MASK with Douglas Fairbanks.

A mere two months later, on March 16, 1929, the Granada was sold to W. T. Grant’s, which re-opened the converted space in January 1930. Grant’s closed sometime in the ‘70s, I believe. The site is now Gallivan Plaza.

This opened as the American theatre on July 5th, 1913, with an ad claiming that it’s the world’s largest movie theatre.