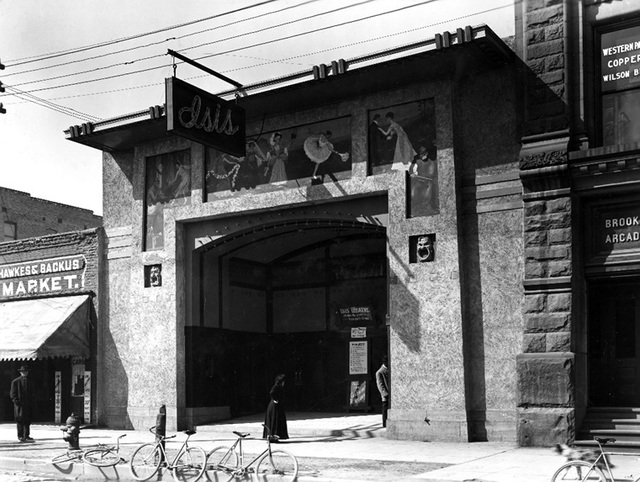 The New Isis Theatre was located in downtown Salt Lake City and opened August 19, 1932. On July 21, 1935 it was renamed Broadway Theatre. On May 6, 1953 it was renamed Colony Theatre and then the Tower Mid-Town Theatre from December 23, 1960. On April 7, 1962 it became the Towne Theatre and began screening adult movies. On January 10, 1973 it was renamed Palace Theatre which was closed down by the authorities on June 1976.

It reopened as the Broadway Theatre on December 29, 1976 and finally closed around 1984.

I found mentions of the Broadway Theatre in various issues of Boxoffice Magazine from 1941 to 1960. The earliest mention I’ve found for the Towne Theatre is 1965 (it was showing Russ Meyer’s soft-core hit “Fanny Hill” at the time.) I’ve found no mentions in Boxoffice of the Isis in Salt Lake at all.

However, the ever-popular Utah Theatres web site has a whole page on the place, with still more aka’s, and the sad but useful information that it has been demolished. There’s also a discrepancy between the closing date of 1976 at the top of their page and the text below that which says it was known as the Broadway Theatre (the third time it had used that name) from 1976 until 1984. The 1983 American Classic Images photo supports the text.

But, yes, it should be the Broadway Theatre, with aka’s of Isis Theatre, Colony Theatre, Tower Midtown Theatre, Towne Theatre, and Palace Theatre.

In the early 70’s adult movies were shown at this theater. Deep Throat and The Devil and Miss Jones played there as a double feature.