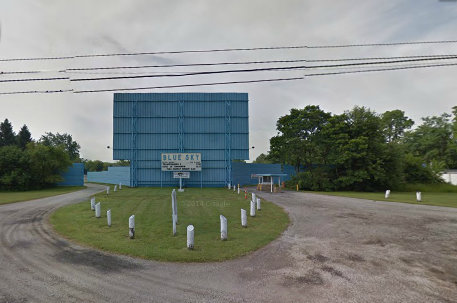 The Blue Sky Drive-In opened on July 4, 1947, screening the 1946 western “Renegades” with Evelyn Keyes, Willard Parker and Larry Parks. It was opened by Dale Morrison who lived next door to the drive-in. From what I was told, the property that the drive-in sits on used to be fruit orchards that Dale had. John Selby who was a design and development engineer for building drive-in theatres was noted for his steel screen towers. In 1948, Co-Operative Theatres of Ohio, Inc. became the buying and booking agency and is still to this day. The Blue Sky Drive-In’s original screen tower was made of wood and had twinkling lights that looked like stars. Since it faced the road, people would drive past the drive-in just to see the lights. Instead of providing a speaker at every parking space, large blast speakers were attached to the screen tower to provide the audio for the entire parking lot. On 7th April 1950, the Blue Sky Drive-In opened the 1950 movie season with new RCA in-a-car speakers.

On May 11, 1955, the Blue Sky Drive-In planned to screen “French Follies” and advertised it as ‘For Adults Only’. Several movie-goers complained to the mayor Don Merriman about lurid advertising posters announcing the coming of “French Follies” at the drive-in. Merriman contacted several ministers about it which prompted a meeting about it. The members of the Sacred Heart Catholic Church circulated a petition against the movie. Deputy Sheriff Steve Helli planned to take the post in front of the theatre and turn away any juviniles from entering the drive-in, if the management went through with screening the girly movie. The management decided to withdraw the movie and substituted it with “The Long, Long Trailer” and “The Sands of Iwo Jima”. Back in the day, the “French Follies” was a typical ‘adult’ drive-in movie which was actually a burlesque show filmed in 1951. There is some topless nudity and some sexually suggestive dancing, but no full nudity or pornography.

A recent photo of the Blue Sky Drive-In:
View link

Blue Skys shining on me,nothing but Blue Skys I see.

Let me see if i can help Tlsloews, This Drive-in parked 225 cars and was owned in 1956 by Dale-Cooperative.

Not a thing Chuck.

The Blue Sky Drive-In made the conversion to digital projection to open the 2014 season.

The July 7, 1952 Akron Beacon Journal had an article about John Wohler, who ran the Blue Sky at the time. “The nine-acre lot is large enough for 430 cars and provides a large picnic area for those who care to take their supper out.” Earl V. Seitz of Sandusky bought the drive-in “the first of this year from Dale Morrison, who lives next door”.

Seitz still owned the Blue Sky in a Jan. 3, 1961 Beacon Journal article about his indoor Strand, which had shut down a few days earlier.

Gary Grieve owned the Blue Sky in a September 1989 article.