Save the Utah Theatre (Official) 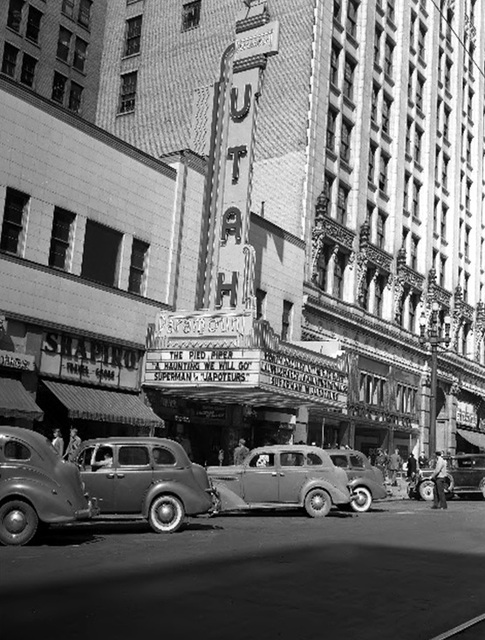 The Pantages Theatre was built in 1919 for vaudeville, opening on December 1, 1920 with Mary Pickford in “Polyanna” showing on the screen plus vaudeville acts on the stage. It was equipped with a Robert-Morton 2 manual 16 ranks organ. On September 11, 1929 it was renamed R-K-O Orpheum Theatre. On September 29, 1937 it was renamed Utah Theatre, opening with a revue on stage “Spices of 1937” plus the movie “The Girl Said No” starring Robert Armstrong. For many years it was one of downtown Salt Lake’s great movie palaces with a seating capacity of 1,823. By the early-1940’s it was operated by Paramount Pictures Inc. through their subsidiary Tracy Barham. “The Sound of Music” showed at the theatre for two years.

Most of the elaborate ornamentation in the theatre was lost in July 1968 when plans by architect Henry George Greene added a floor to convert the balcony into a second auditorium. A concession stand and escalator were added to the balcony level, but most of its ornamentation remained untouched. The lower floor had pillars added, apparently to support sections of the new floor, and any surviving decorations were covered with drab draperies.

The CityRep group used the theatre for live stage productions after Cineplex Odeon let its lease expire in the 1980’s, but they were eventually forced to find a new home when the theatre was closed in 1988 and was sold.

The new owner, a writer from Park City, planned to restore the building for live entertainment, but it never happened. The theatre was sold again and the new owners started a restoration project, but apparently it failed.

In 2019 a ‘Save the Utah Theater’ group was set up to promote a renovation and reopening of the theatre.

The theatre has been vacant for years. Demolition began on April 19, 2022.

Article in today’s Tribune goes into continuing limbo of this wonderful venue.Best thing is a gallery of recent interior shots.

Just added a photo of the Pantages Theatre under construction 1919, photo courtesy of the Old Pictures Facebook page.

And one from 1920 of the completed entrance.

There are some renovations taking place in the surrounding area. Hopefully the Utah Theatre is on the list. It’s fun to walk around downtown and see some of the remaining buildings. A lot of history. Babe Ruth was part of a Vaudeville Troup that performed at the Utah Theatre (then The Pantages). I saw Earthquake here for the first time, in Sensurround Oooo.

For several summers (early 70s) “The Sound of Music” returned. Matinees were 35 cents.

1927 promotional photo added for “Napoleon The Great” at the Pantages Theatre. Source unknown.

Closed in 1988 per the below article, which says the Utah Theatre is in danger of demolition and being replaced by a residential tower project.