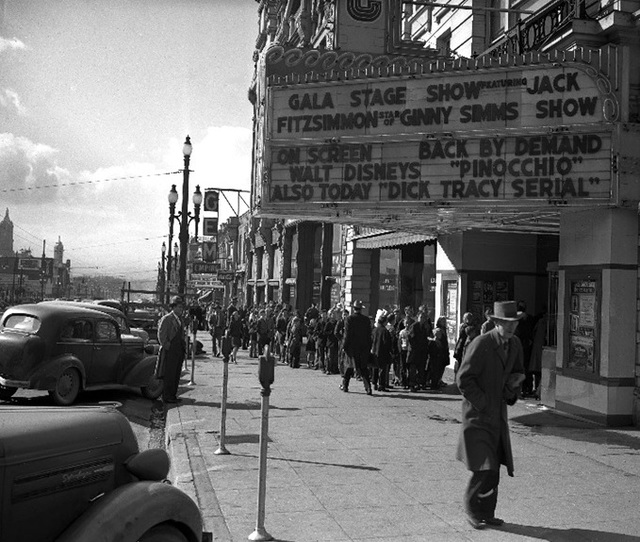 Originally known as the Orpheum Theatre, it opened on Christmas Day 1905, as Salt Lake’s first full-time vaudeville house and had a seating capacity for 1,160.

The theater, an excellent example of Second Empire Revival, was designed by architect Carl M. Neuhausen. A twelve foot statue of Venus tops its central section, while larger-than-life heads guard the front entry. The auditorium and main lobby have been refurbished several times. Except for the stage, little remains of the original building.

In 1918, the theater was converted to show movies and was known by several names including Loew’s Casino Theater which in 1919 was altered to the plans of architect Thomas Lamb. It was later renamed Wilkes Theater, Roxey Theater, Salt Lake Theater, and Lyric Theater from around 1947. The Lyric Theater had one of the first crying rooms in town, and even employed a registered nurse in its ladies room. In 1953, it was one of the first two theaters in Salt Lake to show widescreen movies with stereo sound.

In 1971 it closed as a movie theatre and, the Church of Jesus Christ of Latter-Day Saints bought the theatre in 1972 and restored the building for church plays, renaming it the Promised Valley Playhouse.

In 1996, the theater closed because of structural problems. In 2000, the Church replaced the playhouse by building a new 911-seat theater as part of its new Conference Center.

Salt Lake County paid $50,000 for an architectural study, but voted on July 17 2001 against purchasing or leasing the theater because of the high cost of restoring it. The study concluded that restoration of the Orpheum Theater would cost between $2 million (for a basic seismic upgrade) and $30 million (for a full restoration).

Zions Securities, which owned the building, planned to demolish the auditorium and build a 400-car parking tower. It was demolished in 2003, the facade and lobby was preserved and used for office and retail space.

During the 50’s when it was called the Lyric it seated 1160 people.

The books were cooked to justify destroying this place.It was soooo gorgeous.

These photos from the Utah theaters site via Mr.Memory show what a tragic,stupid waste that the destruction of this beauty was.The justifications for this slaughter were boiled down to one word-greed for profit at the cost of the soul of the city these pratts claim to care so much about.It’s a good thing I don’t have to sustain Zion Securities functionaries as Prophets,seers and revelators at general conference next month.I’d have to become a baptist.`

I attended this theater often during one period of my life,as it was only two blocks from my apt.It was the first theater my first newborn child went to(he’s 35 now).SLC now has just 2 left out of many,and the jury is still out on one(UTAH).This is just so sad and wasn’t the way it should have been.“seismic upgrades"have been the excuse to destroy many bldgs in the West.

It has not been demolished, correct?

I agree this was a tragedy!!! I was pregnant with my 4th child when I was in the production of Fiddler on the Roof at the Promise Valley Playhouse in 1981. My husband and I preformed as Bennie and Susan in Desert Song in 1989 less than 6 months before my husband passed away. My 4 children went to many productions there. The playhouse has many wonderful memories for me and my family. It gave people in the community an opportunity to show off their talents, or give them that get away they needed that only the theater can give. Two of my daughters graduated college in the field of theater. Where can you go to have that experience now? So many of the live theater’s use their already established cast/talents, so the possibility of getting a part during tryouts is slim at best.

In 1920, this house was known as Loew’s Casino Theatre. A biography of vaudevillian Ted Healy says that he appeared there August 9-15, 1920. A notice in the October 23, 1919 issue of Engineering News-Record said that Loew’s Enterprises planned to spend $150,000 on alterations to the Casino Theatre in Salt Lake City. Plans for the project were by Thomas Lamb.