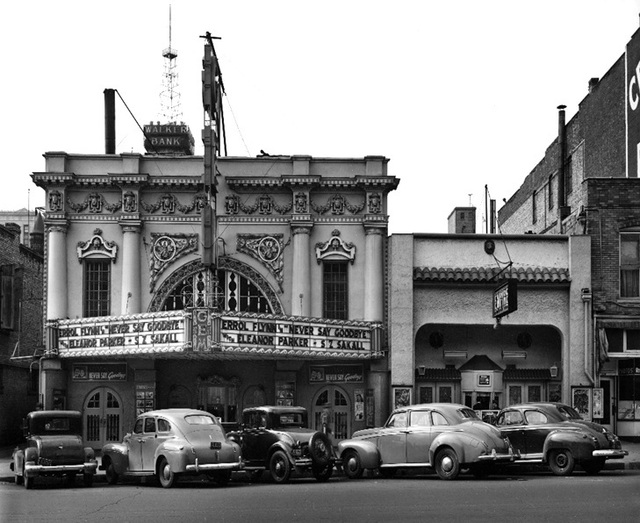 The place is definitely gone.I used to love downtown SLC.It was actually one the the last downtowns to go totally pear shaped.I lived downtown for some many months from Aug,69 to June 70.My wife and I could walk to any number of theaters and great eateries that are all long gone.The Hotel Utah was still one of the world’s greatest.The soon to be gone,if not already, Inn on Temple Square was a sleazy hotel and the bus station.My,but time does march on.I wish all the best to the soulless pratts that think they can save the place.They want a G-rated urban paradise in a R-rated world.It will be tough sledding,or rafting if the spring floods come,as they might again.

This was one of the most beautiful small theaters I ever saw.They managed to stuff a lot of features into a small house.

The marquee shot of The Valient and Sword of the COnqueror would be circa 1962; the IMDB date for both films. Useless but interesting information. j

It appears the Gem Theatre was part of a small chain of 14 theatres scattered thru out Utah. They were all under the name of GEM. I wonder if a Gem Theatre still operates today??

It was a real GEM of a theatre.

I was noticing the pagoda-like boxoffice in that 1912 photo. It’s an interesting bit of Chinoiserie set amid the European classical details of the facade. It looks like there might have been some Art Nouveau stained glass in the arch, the doors, and the upper floor windows as well. I wonder if there are any surviving photos of the interior?

By the sixties it was showing Grade C films.“REFORM SCHOOL GIRLS” and “DRAGSTRIP GIRL” were playing together on Oct.2 1959.

The Liberty became the Gem Theatre on November 2, 1919 with “Broken Blossoms.” After closing following WW2, the Gem was reopened on August 31, 1951. It appears to have closed in November of 1967. A year later it was demolished.

The Exhibitor, Dec. 23, 1953: “Announcement has been made of the leasing of the Gem, by Consolidated Theatres to Sero Amusement Company, Los Angeles. The Gem, closed for renovations, will open on Jan. 1. Sero Amusement Company plans to operate the former second run and art house on a first-run basis.”

The Exhibitor, Jan. 27, 1954: “The Gem, operated by Sero Amusement Company Los Angeles, opened after being remodeled.”