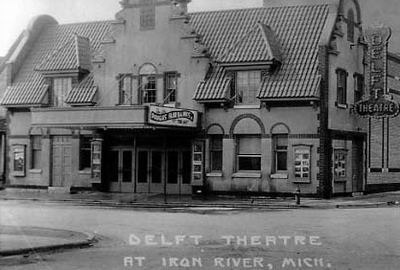 Opened on 19th December 1921 with Charlie Chaplin and Jackie Coogan starring in “The Kid” plus “The Kineto Review”, a short subject.

The architectural firm of Herbst & Kuenzli of Milwaukee designed the building, which was described as ‘a quaint architecture that suggests it might have been copied from a 'gingerbread house’, the type of building one might find in central Europe'.

In the early days the stage was well used by stock companies who would come in and take over the theatre for an entire two weeks. There were also vaudeville shows that complemented the movie programme.

The Delft Theatre was still operating in 1974, but there was was talk at that time, that if and when a new theatre was built in the town the Delft Theatre would close and be demolished. I am presuming here that the latter happened.

If anyone has further information on this theatre, it would be appreciated.

I spent a great deal of my childhood at the Delft Theater in Iron River. The Delft was a beautiful bulding with very interesting characteristics. It really did look like a “ginger bread” house!

Wheather it was Saturday afternoon cartoons or some PG horror movie we were there! I remember walking home in 1975 after seeing “The Devil’s Rain” and being really freaked out! Ah, the memories of that particular night!

The Delft was demolished in 1977. We had to get a ride 15 miles to Crystal Falls to see a movie at the Aldo Theater.

The former manager of the Delft is a good friend of mine. In fact, I worked for him for 15 years in radio. We like to talk about the old days at the Delft. It was a great theater and anyone from the era who lives in Iron River will state that they really miss it- even 30 years after it was torn down.

It’s strange. even after 30 years I can still remember the sound of the front doors of the theater rattling when a logging truck drove by!