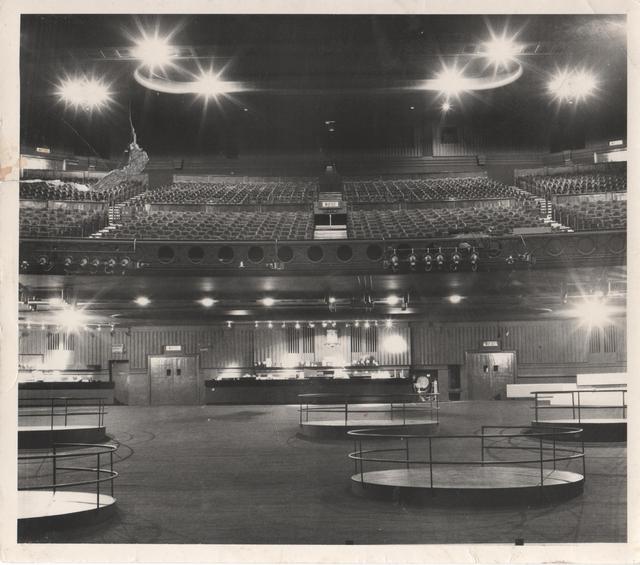 Located on the corner of Silver Street (today re-named Sterling Way) & Fore Street in the outer north London district of Edmonton. This huge cine-variety theatre was built by A.E. Abrahams and the architect was Clifford Aish who also designed the Regal Cinema, Marble Arch in Central London.

The Regal Theatre opened on 8th March 1934 and was an immediate success. As well as film shows they were accompanied by lavish stage shows. The 45 feet deep stage was fully equipped and even had a revolve in the centre which could rise up. The proscenium was 58 feet wide and there were 16 dressing rooms. There was also a Christie 4 Manual/15 Ranks theatre organ with an illuminated console that was opened by Sydney Torch.

The building also contained a restaurant and ballroom, which both had their own separate entrances. Inside the auditorium seating was provided on orchestra and circle levels and all lighting was hidden in troughs which ran in three bands around the proscenium arch and concealed lighting in the domes in the ceiling.

Within days of opening A.E. Abrahams had leased the Regal Theatre to the Hyams & Gale circuit and they operated it until they were taken over by Gaumont Super Cinemas in October 1935. Eventually Gaumont became part of the Rank Organisation but always the building was owned by the Abrahams family who installed clauses in the lease that it should always remain fully equipped as a cinema with full working stage facilities.

The stage was used less frequently as years went by, but still packed them in when artists such as The Beatles and even Frank Sinatra ventured into outer north London when the 2,940 seats were filled and the 1,000 capacity standing room was taken up.

But these events were few and far between and on regular film weeks, audiences were sparse and the with the size of the cinema working against it in the 1970’s, Rank closed the Regal Cinema as a full time cinema on 6th July 1972 with Charles Bronson in “Chato’s Land”. It was re-vamped with the orchestra stalls seating removed and the floor levelled, the building became a disco and live concert venue named the Sundown. Groups such as Hawkwind, Doctor John, Steppenwolf, T-Rex, Faces, Rod Stewart, Elton John and The Groundhogs played this venue.

However, this venture failed and on 24th March 1974 it re-opened as the Regal Cinema, using seating that had remained in situ in the circle. This also failed and the Regal Cinema screened its last films on 3rd August 1974 with a double bill British comedy programme Wilfrid Bramble in “Steptoe and Son” and Warren Mitchell in “Till Death Us Do Part”.

The Regal Cinema was converted into a Top Rank Bingo Club and this lasted until 1985 when planning permission was granted for demolition and the wreckers moved in during November/December 1985. Right up to the end, the Rank Organisation had honoured the lease and kept all equipment in the theatre to full working order. Projectors were well oiled and run on a weekly basis just in case films returned, the stage revolve, curtains and screen were all there, even the Christie organ which was often still used at well attended concerts and to entertain the bingo players was in immaculate condition when the bull-dozers moved in.

A Safeway supermarket was built on the site which became a Lidl supermarket. By 2018 it was in use by the Brazilian based United Church of the Kingdom of God as a ‘Help Centre’.

Hi darkwind & andygarner
Nice to know the Regal along with many more cinemas is still rembemered as anyone who has worked in them will know you think of them as “your” cinema I do have some bits & peices of the Regal & some photos if you would like to know more my e-mail address is .uk

I remember the Regal in the great days of the 50s. Jerry Lee Lewis, the pop concerts, The London Festival Ballet, Pantomimes etc. I also worked there in the 1960s. I remember Mr Hurry so well. He was a fantastic man. He was much respected and loved by the staff and affectionately known as ‘The Old Man’ a term also used for the captain of a ship. He ran the place like clockwork. I can see him now in evening dress and smoking a cigar! He was the spitting image of Billy Cotton. I often wondered what became of him.

I joined the Regal in 1958 as a trainee projectionist, the equipment was modern and in good condition to other cinemas that I visited on day’s off. I remember Frank Cooper was second projectionist at the time. apart from the films, we had a stage show once a month with the likes of Shirley Bassey, The Dave Clark Five, Helen sharpiro etc Where we used the Spot lights or worked back stage, we also used the spots in the Regal Rooms for Cabaret’s, so training was the best around. I left there in 1960 as third projectionist at the Metropole, Victoria and then onto the Columbia, Shaftesbury Avenue. But my love as always been the “Regal” Edmonton.

I remember the Regal. My mother used to take me there to see films as well as live shows, I remember going with friends to see Marty Wilde, Billy Fury, Wee Willy Harris, Joe Brown,and my favourite at the time,Cliff Richard. My nephew remembers seeing Rod Stewart and how he was kicking footballs about during rehearsals. I remember too the Saturday morning pictures as a child….6d to get in and 6d to spend !!! On your birthday you got a free entry and “Uncle Ernie” ( Ernie Hurry) wished you a happy birthday from the stage.I remember the Wurlitzer Organ….oh those were the days. It got replaced by “The Sundown” disco then was eventually demolished ( so sad ) and Safeway Supermarket took over. Safeway was later replaced by Lidl supermarket which is still in situ. The Regal was a magnificent building with a fabulous ballroom.It had 2 entrances with a small parade of shops between the entrances….Oh those were the days….sadly all gone..

Oh, how sad only to have the memories of such iconic treasures, but better than nothing. I remember going to the Saturday morning kids' programmes. Pretty chaotic, as I recall! More significantly, I can remember going, with my mum and dad, to his firm’s (Beautility) annual dinner/dances, in the “Assembly Rooms” upstairs. I have a photo (somewhere) of the three of us at one such event. Much later, in 1963, I went to see the Everly Brothers. They were “supported” by The Rolling Stones (!), who had just released their first single “Come On”. The audience went absolutely MAD for The Stones, and the Everlys definitely came second that day! If my memory serves me correctly, apart from all the various amazing facilities incorporated in this wonderful theatre, wasn’t there a massive hall, just for queuing in, while you waited for a seat to become available? Unbelievable, now. Our favourite record shop of the time (Dancy’s) was just over the other side of Silver Street, too. Happy days…

Sundown was a great venue for live music saw Steve Marriott with Humble Pie fantastic concert also remember the Faces Dr John Heavy Metal Kids.The Disco was great too Will always remember Love Train And people laying on the floor around those circular dance platforms first girlfriend kisses cuddles etc great memories thanks whoever posted the photo inside it was just as I remembered. The DJ was a great guy funny and always twirling his Mike haha magic days

I have just found this site. brought back memories from long long ago.Saturday morning club, all the way home playing Zorro or the lone ranger. First date with my wife was back row down stairs,then fish&chips from chip shop near bike shop and change from ten bob note. also on a Sunday queued in a lobby?think for one and sixpence for 7 o'clock show. Then you left by a door onto the car park side,which in those days if I remember was large.We also saw shows there Jonny Dankworth played there. Moved away from Edmonton in 1961 have only visited twice sadly not as I remember it.Another fond memory playing cowboys an Indians in bushes near where the brook went under Silver .

The Christie organ from the Regal is now installed at Paul Kirner’s Music Palace near Porth in S Wales.