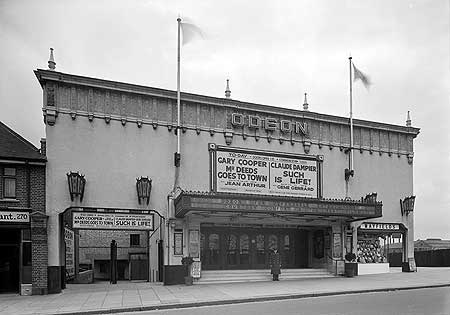 Located in the south-western district of Northfields in Ealing, west London it opened as the Avenue Theatre on 5th September 1932 with the movie “The Honourable Mr. Wong” starring Edward G. Robinson and Loretta Young and the British film “Lord Babs” starring Bobby Howes. On stage was an acrobatic dance troupe Michel and Arnova. Bertram Orsman was at the console of the ‘Avenue Wonder Organ’ a Compton 3 Manual/6 Rank instrument. The theatre was also equipped with its own small café/restaurant located over the main foyer.

The main feature of the architecture, unusual in a UK cinema was its use of a Spanish theme which inside the auditorium was given an Atmospheric style treatment with little villa’s along the side walls. The ceiling treatment at the Avenue Theatre was different to most Atmospheric style theatres in that instead of having a plain blue ceiling with twinkling stars and cloud effects, here we have a Spanish courtyard prepared for a fiesta with a draped valarium in richly embroidered striped tapestry, gathered along the centre and hung in loops towards the side walls. In other words; a tented ceiling to shade from the sun. Lighting came from elaborate lanterns which hung from the ceiling which gave a warm amber glow, and soft backlighting behind the villa’s on the side walls.

The Avenue Theatre was taken over by Oscar Deutsch’s ever growing Odeon Theatres Ltd. circuit in 1936 and the name was changed to the Odeon Theatre, Northfields, Ealing. In later years the café/restaurant was closed down and after some flood damage in 1970, the organ was removed from the building in 1972. The decorated tented ceiling material was replaced due to years of dust, grime and tobacco smoke damage and the replacement material was a pleated plain red cloth, which to my eyes looked a little cheap. In the late-1970’s there were proposals to convert to bingo, but this never happened, and the next proposal was to convert to a triple screen cinema, which again came to nothing.

The Odeon became the Coronet Cinema from 19th November 1981 when Rank Theatres leased it to Shermans Coronet Circuit (Panton Films). This only lasted a few years and it closed on 17th January 1985 with Arnold Schwarzenegger starring in the aptly named “The Terminator”.

An application for conversion to a bingo hall was refused and the Ealing Cinema Trust was formed to save the building and re-instate cinema use. However the building was sold and plans were put forward to convert it into a nightclub and build a supermarket on the car park.

Surprisingly, the nightclub use was approved, but the supermarket was refused! All seats and stage fittings were removed, the orchestra floor was terraced and the circle re-stepped to become the bar area which had tables and chairs and it opened as the Top Hat Club in May 1988, this lasted until 1994.

It was then taken over by the Elim Pentecostal Church who over the years have slowly been renovating the building back to its former splendour.

On 14th October 2000 the Cinema Theatre Association (with the co-operation of the church), organised the first film show in the theatre for 15 years. A temporary screen, 35mm projector, sound system and seating was set up and several hundred members of the CTA attended a screening of the classic Ealing comedy film “The Lavender Hill Mob” starring Alec Guinness.

The theatre has been a Grade II* Listed building since 1974.

A gallery of photos taken when I visited the building in 2006 can be found here:

How wonderful to see Gary Painter’s pictures. I used to attend the Odeon almost on a weekly basis at one time, and it’s great to see what a marvellous job the Church has done/is doing with the interior.
I went to the nightclub on a couple of occasions when the local NHS trust rented it for their christmas party. During this time, it was also used as the venue for a film fair for two or three years, and 8mm and 16mm films were shown in the auditorium. I appreciate this wasn’t on the scale of the CTA screening, but it WAS an instance of the place being used for what it was designed for.

A set of vintage photographs of the Avenue/Odeon:
View link

Way back in the early 1970’s I used to do the odd relief manager duties here I loved the place because of its wonderful décor and style. I was known then as Robin Brewer if anyone remembers me feel free to get in touch.

An unusual and lovely cinema. I saw several films there in the late ‘70s/early '80s and was always impressed by the standard of presentation. As well as the large screen, sharp picture and excellent sound, it was nice to see both footlights and batten still being used with the three, primary colours to produce some beautiful effects on the screen curtains and matching border. This and the State, Grays, were my favourite non-West End venues in which to enjoy films in the Greater London area.

A beautiful building which thankfully still exists as a church albeit altered internally when converted to a nightclub in the 1980s. Does anyone know what happened to the three manual Compton organ which was apparently removed after a flood in the 1970s?

This part of London is desperately underscreened… There was a rumor of a Virgin/UGC complex coming in before it went over to Cineworld…any updates?

I think you must be thinking of the former Empire Cinema, Ealing Broadway (ex-Forum, ABC, Virgin, UGC etc)which was demolished (apart from the facade) in 2009 to make way for a multiplex which was never built. Work has now started on the development site which is due to include an 8-screen Picturehouse complex albeit in a different location from the original cinema.