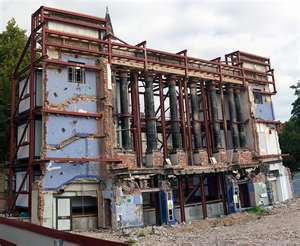 Located in the West London district of Ealing. The Forum Theatre was one of two near identical Forum Theatre’s which were built for Herbert Yapp in 1934 (the other is the Forum Theatre, Kentish Town in the north of London) and both were taken over by Associated British Cinemas(ABC) within a year of opening. Designed by J. Stanley Beard & Clare both had almost identical facades dominated by eight tall columns with a double row of windows between the inner six. Each theatre seated 2,175 on two levels (1,339 in the stalls & 836 in the circle) and each had a large stage with fully equipped fly tower.

The Ealing Forum Theatre was the first to open on 23 April 1934 with Gracie Fields in “Love, Life and Laughter” on the screen, Debroy Sommers & His Band on the stage for the entire week and organist G.T. Pattman on the Compton 3Manual/9Ranks organ with an illuminated console. Film & stage star Jack Buchanan performed the opening ceremony. The interior of the Forum Theatre had an Italian Renaissance style design with a wide 46 foot rectangular proscenium opening. There was café/dance hall located over the entrance foyer and also a 300-car capacity car park.

It was renamed ABC in 1961, and has undergone many name changes since then (Cannon, MGM, ABC, UGC, and Cineworld, Empire). The Compton organ was removed from the building and was installed in the chapel of Wormwood Scrubs prison in west London where it has been converted into a church instrument.

From December 2006 it came under the ownership of Empire Cinemas, UK. The seating capacities were: 1. 550, 2. 330 and 3. 170. It was a popular cinema in good condition, showing first run films. The Empire Cinema was closed on 6th September 2008. The auditorium and foyer areas were demolished in early-2009, and a new 16-screen multiplex cinema for Empire Cinemas was planned to be built behind the original façade. It was also planned that the original façade of the former Walpole Cinema, Ealing will be incorporated into the design of the new multiplex.

By April 2012, work has not begun on the rebuild, and the original façade stands shored up supported by scaffold. Despite numerous promises by Empire Cinemas that construction would begin, nothing happened, and in October 2015, Ealing Council passed a Compulsorily Purchase Order on the site. Plans have been approved to build an 8-screen cinema, with building work commencing in December 2016 and a projected opening of the cinema in 2018. It was not known who will operate the cinema. The original façade will be retained as an entrance to the site which will also include 209 flats, shops and restaurants.

The project was taken over by new owners of the site, and will be leased out to Picturehouse Cinemas, to be known as the Ealing Filmworks. The 8-screens will have a total seating capacity of 1,045 and was due to open in 2019.

Still no progress on this cinema other than the frontage being preserved; apparently the council (who are based in the building opposite) have now demanded a completion date for the work to be done.

The original planning approval was dependent on the developers being able to guarantee completion of the project, so this doesn’t surprise me at all. My only concern about the whole thing concerns parking in the Ealing area – becoming virtually non-existent – so where 16 screens worth of punters are going to go is a bit of a puzzle!

This is a link to a British Pathe film about the original building of the cinema. It also contains footage of the side view of the Walpole cinema, which was around the corner.

Alas, Empire Cinemas have still not started work on re-building Ealing’s cinema after closing it nearly 4 years ago for “re-building”. It remains the sad pile of rubble in my avatar photo here.

Ealing residents have started a petition to encourage the council to put pressure on Empire to start work, or to pursue compulsory purchase of the cinema site if Empire won’t start work.

Please could you support the campaign by signing the petition: http://www.petitionbuzz.com/petitions/saveealingcinema

This link gives an update from Empire, how accurate it is I don’t know but hope they are committed to completing this project and one of my favourite cinemas wasn’t lost in vain.

Some recent information on plans for this site.

After a series of delays to the opening of Ealing Filmworks it is now expected to open in spring 2022, the council has confirmed.

Work has been underway to build the New Broadway cinema since 2016, as well as more than 200 homes, a public square and a range of restaurants and bars.

But the opening date has been pushed back several times, first from an ambition for an early 2019, then pushed back to 2020, and fianlley an expected opening in summer 2021.

Ealing Council bosses are now pledging for the finished site to open in spring 2022.

An Ealing Council spokesperson said: “The construction of Filmworks has continued throughout the Covid-19 pandemic despite the challenges of social distancing for the workforce and delays in construction material from the supply chain.