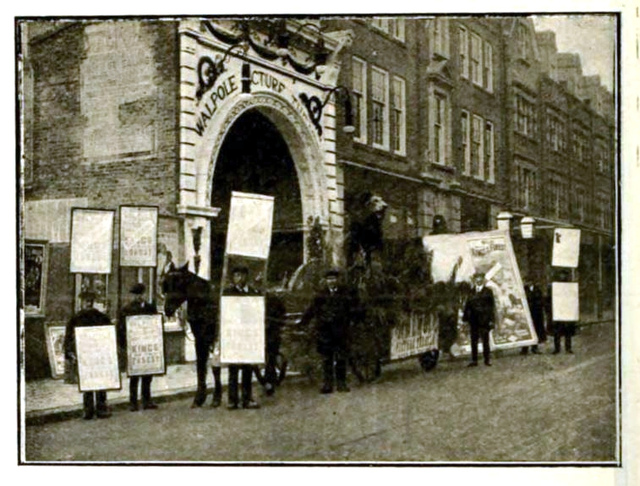 Located in the west London district of Ealing. Originally opened on 23rd December 1908 as the Walpole Hall Roller Skating Rink which was designed by architect Alfred Burr. It was converted into the Walpole Picture Theatre from 29th July 1912 and architect J. Stanley Beard was responsible for the conversion. The conversion included the erection of a charming ornate facade that was faced in ceramic tiles, some of which had the theatre’s name enscribed.

Seating was provided for 1,600, all on one level in the stalls and the interior of the building was very basic, with roof trusses showing and only a decorative proscenium arch to give a little glamour to the place.

It was operated as an independent by T.B. Percy, J.D. Percy and H. Usher, who 20 years later built and opened the Atmospheric styled Avenue Theatre, Northfields, Ealing (later Odeon Ealing).

The Walpole Picture Theatre was taken over by Oscar Deutsch’s Odeon Theatres chain from 18th February 1936 and it was the main Ealing town centre Odeon Release theatre for many years.

Later operated by the Rank Organisation who had taken over Odeon Theatres, they closed the Walpole Cinema on 28th October 1972 screening the double bill re-issue programme; Malcolm McDowell in “If” and Richard Benjamin in “Goodbye Columbus”.

The building was converted into a carpet store and when this closed it became a rehearsal studio for rock groups. It was demolished in May 1981 and an office block named Walpole House was built on the site, which is used by Thames Valley University.

A nice gesture of the developers was to save the tiled frontage and it was re-erected against the side wall of a building just off Mattock Lane a short distance away, where it remains to be seen today.

It’s an odd place for the frontage to end up!

Although the film this link connects to concerns the building of the Forum cinema around the corner, the exterior of the Walpole features quite prominently in it.

What a find. By the time I was involved with the place in 1970, the whole of the inside was painted black. If my memory serves me well, the picture was taken from a point in front of the steeply raked rear stalls. The cinema was actually quite large inside, the projection throw being around 100 feet. The ‘scope picture was like a postage stamp from the back, due to being the same width as the 1.33:1

This cinema had BTH Supers projectors in 1960 The chief was a man called Ron Pask a union steward. There was a lot of friction between the projectionist here and us at the Forum, Ealing which backed onto this cinema.

I worked at the Walpole in the 60s as a trainee Projectionist under Ron Pask, alongside me was Andy Mackie, “Titch” Holloway and James “Jim” Haquoil. I moved with Ron to the Odeon Northfields and worked my way up to 2nd projjy as we were known as. I loved working with Ron, he was a tough outspoken man. Ex RAF he ran a very tight ship.