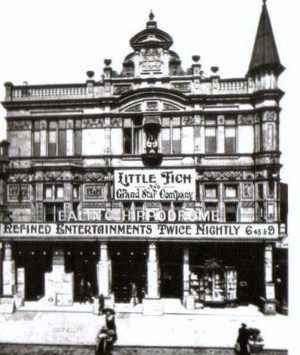 Located in the west London district of Ealing. The Ealing Theatre opened in 1899, designed by architect George G. Pargeter with architect Walter Emden in an advisory capacity. It was reconstructed in 1906, possibly to the plans of theatre architect Bertie Crewe and re-named Ealing Hippodrome Theatre. With a seating capacity for 1,800, it was part of the Walter Gibbons theatres circuit. The proscenium was 22 feet wide, the stage was 32 feet deep and there were six dressing rooms.

It was converted into a full-time cinema from 3rd November 1908 and renamed Broadway Cinema. In 1910, a smaller Broadway Cinema was built adjacent to the theatre, and the owners of the new Broadway purchased the larger old theatre building, which I believe went back to its Hippodrome name. In 1913, adjoining walls were demolished to enable the two buildings to share a common entrance and the Broadway Cinema was closed and converted into a dance hall. The Hippodrome Theatre was equipped with Gaumont projectors in a new operating box and modifications to its entrance, which were the plans of architect Edward A. Stone. It re-opened on 16th March 1914 as the Broadway Palladium Cinema. In the early-1920’s a straight 2Manual organ was installed to supplement the orchestra.

The Palladium Cinema was closed by the Rank Organisation on 1st Febraury 1958 with Kirk Douglas in "Paths of Glory" and Mickey Rooney in "Baby Face Nelson". Apparently, the building needed structural work to be carried out, and the cost was prohibitive. The Palladium Cinema was soon demolished and shops built on the site. By 1996, it was occupied by W.H. Smith, who are still there in 2009.

Tinseltoes, you are correct. The Forum was in Ealing, on the Uxbridge Road. It’s listed on this site as the Empire Cinema, Ealing (The last name it had)