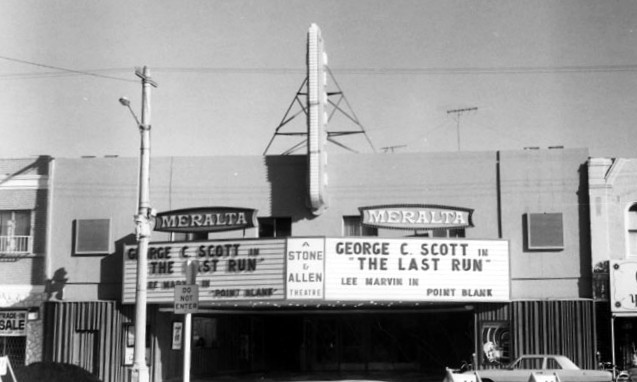 The Meralta Theatre opened in March 1924. It closed in the early-1980’s and was demolished.

Here is an LA Times blurb from 2/24/83. “Sure, we demolished the theater, but we named the office building for it, so we’re square, right?”

In the 1930s I lived three blocks from the Meralta. At ages six-seven my little brother and I attended the ten-cent Saturday afternoon matinee with a newsreel, previews, cartoon, main feature, and our favorite, the weekly serial with cliffhangers and the works. The Meralta introduced me to Franz Liszt’s beautiful “Les Preludes.” To this day when I hear it in the concert hall I see Flash Gordon’s rocket-ship mockups wobbling into outer space on invisible strings. It was the ticky-tacky 2001 Space Odyssey of its day. One preview scared the pants off of me when a giant genie, played by Rex Ingram, shot up from a bottle uncorked by Indian boy actor Sabu. The following week I went for more terror at “The Thief of Bagdad [sic],” an all-time favorite that I’ve seen several times since. One day my brother and I went AWOL from Pacific Military Academy up in the Cheviot Hills, walked three miles to see a picture show at the Meralta. I still don’t know how the Commandant found us, marched in Gestapo-style, and personally hauled us back to the school, where corporal punishment was no issue. We got swats (not too hard), an hour of standing at attention against the wall, and a full day of litter pickup on the campus grounds. So sad to see the old movie house dead and gone.

Here is a January 1983 photo, around the time the theater closed:
http://tinyurl.com/ctzlje

I used to go see movies at this theater in the 70’s.. it was lit with green lights inside.. the lobby and bathrooms were painted black! It wasn’t a showplace by any stretch of the imagination…
but if you compare it to todays tiny box theaters, I much prefer the Meralta! Does anyone have any interior pics of the place??

I went to the Meralta many times growing up in the mid/late 60’s in Culver City. I saw a live show with the 3-Stooges there one summer as well….Those were fun times!

The Meralta Theater (in Culver City CA) opened in March 1924 in a building that fronted the 9600-block of Culver Blvd. Other businesses in the block included a sweet shop, a drapery, Western Union, and a second-story hotel. The ceremonies were hosted by Will Rogers and the movie shown was “The Galloping Fish”, produced by Thomas Ince at his local studio.

The theater’s name derived from the two owners, Pearl Merrill and Laura Peralta; they lived upstairs in the building and were also connected to the Meralta Theater in the city of Downey. Pearl sold real estate and later insurance in town, while Laura was a seamstress at the movie studios. This connection led to many klieg-lighted premieres of films by Charles Chaplin and others being held at the Meralta.

A fire during World War II halted operations for a while, due to wartime restrictions on construction, but arrangements were made to relocate to the second-story auditorium of City Hall until the theater could be rebuilt.

The films exhibited in later days at the Meralta were restricted to non-R-rated fare, since the two ladies still lived upstairs, and had a huge one-way-mirror plate glass window (perhaps 4-feet by 6-feet) in the living room of their apartment that looked straight at the screen. The window could be seen to the right [east] of the projection booth.

Operations continued into the 1980s, but under other management: the theater showed third-run features for a while, then movies made in India. After the death of both owners, the building was torn down and replaced with the Meralta Plaza office complex, which opened in 1983.

I can add just a bit more…When I moved to L.A. in mid 1980 the Meralta was one a group of four “second run” movie theaters showing two recent movies for 99 cents. (I think the other three were The Criterion in Santa Monica, The Sherman in the valley, and The Warner in Beverly Hills. People told me that in the late 1970’s it had been two movies for 49 cents. The World on the east edge of Hollywood near Gower was not part of the group, but often showed three movies for a dollar or two. I think the Clinton on La Brea was also a bargain second run theater in that era.)