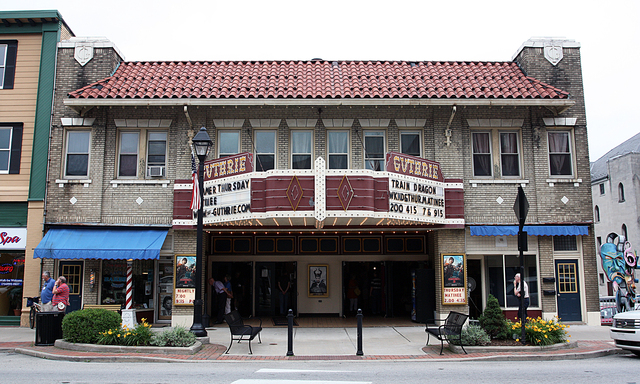 Built in 1926 as a live theatre but placed a large square white plaster screen on the back of the stage and started to run silent films between shows, from there it grew into a movie house, opening on August 1, 1927 with 870-seats. The seating capacity was later reduced to 376. Located in the heart of a small town, Grove City, PA at the edge of Grove City College. Just your small town theatre that is rapidly disappearing across America, warm, friendly, big screen, big sound, nice price. Following a renovation in 2018, it has reopened with 500+ seats, with 50 rocker seats in the balcony.

Nicely written and so very true as I just visited this theatre and was taken on a tour that included seeing the “large square white plaster screen on the back of the stage”. Very unusual. The marquee was lighted upon arriving at the Grove City theatre then headed to New Castle PA to see the location of the first Warner Brothers silent film theatre as Cascade Center. Go to www.firstwarnertheatre.com

Lost Memory: A nice evening photo of the Guthrie. I have visited this theatre and it is what I’d refer to as a….survivor!

I’ve lived in Sandy Lake since I was eight. This has been one of the only theaters I go to. The popcorn is good and doesn’t make you sick; they have bottles of pop instead of foundatin, and the price is right. The balcony finally reopened a couple of years ago but just for the adults. Even with the new multi theater plexes, I still love going to the Guthrie!

Eliza: Good for you! Keep frequenting the Guthrie and not those new multi theatre plexes! As you know they have NO charm!

I am writing a magazine article on the Guthrie Theatre and would love to talk with anyone who has frequented it in the past and continues to do so. Please e-mail me at ASAP. Thanks! – Chuck Sambuchino

An August 7 Boxoffice item about the sale said that J.G. Carruthers had begun his theater career in John Guthrie’s Lyric Theatre at Grove City, the town’s first movie house, which Guthrie had opened in 1907. Carruthers mentioned the Guthrie Theatre’s mascot, a stuffed eagle then mounted over the foyer fireplace, which had originally been placed over the boxoffice of the Lyric and had thereafter been displayed in each of Guthrie’s theaters.

Mrs. Guthrie, who had taken over the theater after her husband’s death in December, 1934, was interviewed for Boxoffice Magazine’s issue of June 1, 1935. The article included three small photos of the theater, and said that Mrs. Guthrie (to whom it referred rather quaintly- or perhaps disturbingly- as “an exhibitress”) had recently redecorated the theater. She described it thus:

“The stage set represents a Spanish exterior, side walls treated with over drapes and backings decorated with placques copied from the ‘Guthrie’ and ‘Montgomery’ coats of arms (Martha Montgomery having been my former name.) The curtain is appliqued with a Spanish character design. The organ grilles have balconies decorated with Spanish shawls, carrying out the same scheme as the balcony of the theatre. The foyer arch and standee rail are also draped, and double doors with glass panels were also added to the foyer, as well as a fireplace which was built in. The ceiling is covered in a canopy effect. A baby grand piano refinished in antique ivory is placed on the stage. The organ has been entirely overhauled by Mr. Herman Stahl of Erie, Pa., who built it.”

The accompanying photo of the auditorium shows the expanse of fabric it sported, including the great billows suspended from the ceiling. It makes me wonder what her fire insurance must have cost, and how the place ever escaped becoming an inferno during her tenure there.

Martha Guthrie made use of her Mad Decorating Skilz later on, as the August 28, 1943, issue of Boxoffice said that she was then running an interior decoration business in Grove City. She continued to be mentioned in the magazine occasionally as late as 1948, then vanished until 1969 when the issue of July 28 carried a brief notice of her recent death. By then she had become a “former exhibitor,” rather than a former “exhibitress.”

I just returned from my visit to the Guthrie. The restoration is wonderful and the theatre is operational. Seating has already been increased and final count will be +500 seats, The Balcony now has 50 Recliner seats and new seating on the Main floor is coming.

Discussion has begun to install an Organ in the theatre. It originally had a Herman Stahl pipe organ. The 2 Organ Chambers are spacious.

I will keep you informed as things develop – but this is going to be great!

Anyone wishing to contact me directly may do so:

According to the February 3, 1926 issue of Variety, the theater being built for John Guthrie at Grove City, Pennsylvania had been designed by C. W. Bates and W. H. Cook of Wheeling, West Virginia. This would have been architect Charles W. Bates and his then-partner, engineer William H. Cook. Bates is known for designing a number of theaters in West Virginia and eastern Ohio, including Wheeling’s splendid Capitol Theatre.