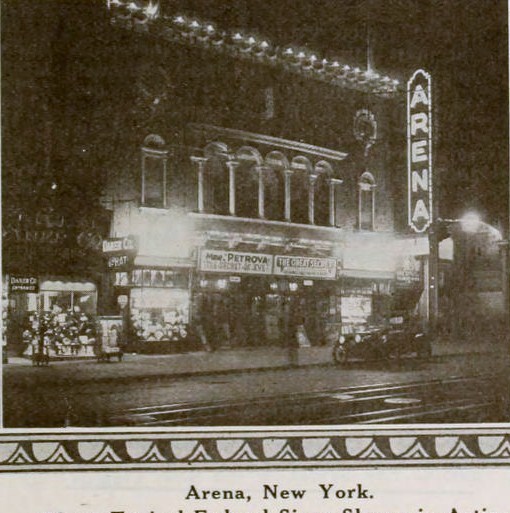 This late-run movie theatre on the west side of 8th Avenue near W. 41st Street depended partially on spillovers from the nearby Loew’s American Theatre. Very little information about the Arena Theatre’s history seems to be available, but it opened in 1918 and was operated by the Consolidated Amusement Company. Various Film Daily Year Books from 1926 list its seating capacity in the 800 to 1,000 range, though the most often cited figure is 953.

In 1944, an Italian-American group that had been running vintage Italian films at the Park Theatre (originally Majestic Theatre) in Columbus Circle under the name of Cinema Verdi switched to the Arena Theatre when the Park Theatre went legit as the re-christened International Theatre. Now known as the Arena Cinema Verdi, the 8th Avenue house operated until 1948-49, when it was demolished to make way for construction of the Port Authority Bus Terminal.

The Cinema Verdi policy was then moved to the Princess Theatre, where it remained until that closed for demolition around 1954-55.

Thanks for clarifying the exact location of this incarnation of “Cinema Verdi,” which was seems to have been more like a peripatetic forum for Italian movies. In looking at ads of this movie theatre, I wasn’t quite sure which side of Eighth Avenue it was on. A New York Times ad from April 25, 1947 for the Arena Cinema Verdi promotes the American premiere of a movie called “The Little Martyr,” described in the ad as “a pulsating drama of childhood.” This was in fact director Vittorio De Sica’s first truly great film, the 1943 “I bambini ci guardano”…which later was retitled to a more accurate “The Children Are Watching Us.” Incredibly, it was not reviewed by the New York Times at the time! Only four months later De Sica’s “Shoe Shine” would open at the Avenue on 6th Avenue to ecstatic reviews. If critics (and audiences) had been aware of De Sica’s perevious film on childhood, shown recently two blocks away, they might have made some connections to and references to that earlier masterpiece. Not until a 1985 16mm run at the Thalia Soho did the Times review it for Richard Schwarz’s presentation. The film, however, had already circulated in 16mm prints for non-theatrical showings and had already had other archival showings at film museums.

Thanks for the tip. I will pursue that the next time I am in Manhattan. And I know Italian.

See my previous comment for April 23, 2005 concerning the virtually unknown presentation of De Sica’s I bambini ci guardano / The Children Are Watching Us at the Arena Cinema Verdi under the title of The Little Martyr. And see the newspaper ad here.

According to the January, 1918, issue of the trade journal Architecture and Building, the Arena Theatre was designed by the firm of Eisendrath & Horwitz.

You noted : “If both roof and inside theatre are used at the same time,” The roof theatre must have been closed before 1934 as nothing existed above the theatre itself. Trivia…. Adjacent to the entrance, on the North side was a small shop that sold a hot dog and a fairly large stein of root beer for, believe it or not, for a NICKEL!

That site seems to require a log-in, TT.

The magazine referred to by Joe Vogel has a nice pic of the exterior. It is visible here:

Direct link to the above.

The Village theatres below is also a rare photo.

Could somebody link the Village photo with it’s site on CT.