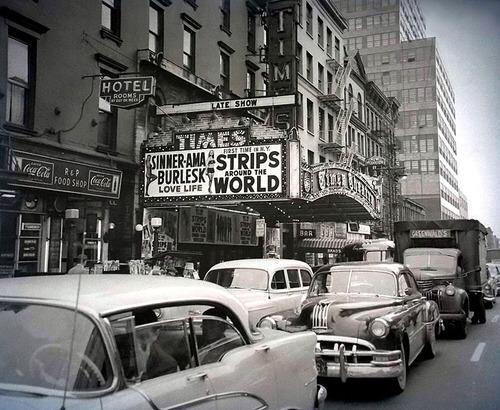 For at least part of its life, this small, late-run movie house had two entrances and two marquees, the largest at 302 W. 42nd Street, just west of 8th Avenue. The smaller one, which was probably the original and later used just for display purposes, was at 653 8th Avenue.

The theatre had a curious history, being built in the gutted interior of Vogel Brothers, a 19th-early 20th century department store that specialized in clothing for men, women, and children. Vogel’s had taken up the entire SW corner of 8th Avenue and W. 42nd Street. After the theatre was built, the remaining space fronting on the two streets was converted into stores and eateries. The Times Theatre was opened by 1926 when it was operated by the Consolidated Amusement Company chain.

Due to its location west of 8th Avenue, the Times Theatre played its movies well after all the other 42nd Street theatres, and was one of the first to show adult fare, though no more than nudist documentaries or filmed striptease shows. In 1956, the head of the nearby Holy Cross Roman Catholic Church and its allied girls' high school tried to get the Times Theatre operating license revoked, claiming that the theatre’s “lewd” advertising and programs were attracting degenerates and contributing to juvenile delinquency.

The campaign failed, but the Times Theatre closed soon after that to make way for an expanded Port Authority Bus Terminal.

I don’t remember this one either. But with that programming, Dad probably made certain that my eyes focused on the main 42nd Street marquees.

Brings back a memory of seeing an action double feature at the Empire in the 50s but the “Coming Attractions” were for a nudist film at another theater. Dad put his hat in front of my eyes and laughed.

Here is an undated pic of the Times Theatre
View link

Still listed in the 1959 Film Daily Yearbook as a J.J. Theatre, as is the Tivoli.

Those are wonderful photos William added to this page. Thanks!

On a recent re-run of Burns and Allen, the Eighth Avenue marquee was in view for several seconds as Ronnie drove up the avenue.

A great marquee shot can be seen here

Somebody felt the need to get a lot of coverage of 10 Days in a Nudist Camp. IMDB lists it as a 1952 documentary by Samuel Cummins ~ “A documentary that profiles nudism and its lifestyle around the world.” Reviewer comments are none too favorable.

10 Days in a Nudist Camp is currently available for viewing on Amazon Prime Video.

The 8th Avenue marquee can be seen in the below video at 1:48 and 2:59, and the 42nd Street marquee at 3:03. The head end is Chicago, so they have the description reversed.