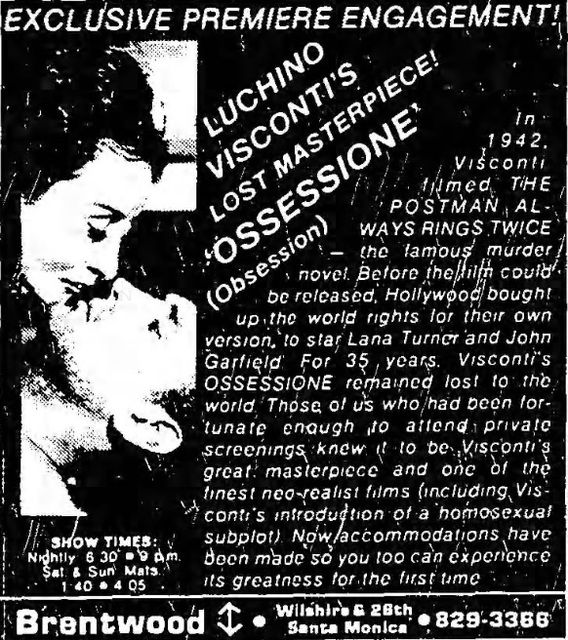 Located in the Brentwood section of Santa Monica. The Brentwood 1 & 2 was once a bowling alley and was later converted into a twin theatre opening on July 1, 1970. It was showing second run features and double features in the 1970’s.

In the early-1980’s Cineplex Odeon used it as a first run theatre until it closed in 1990 after a wave of multiplexes (including a new Cineplex fourplex) on the Third Street promenade opened.

It was used for retail space, but has since been demolished.

Contributed by B Erickson, Ray Martinez
Get Movie Tickets & Showtimes

William,
do you know approximately what year this was? I left the westside in the late 80s and when I came back in the mid 90s I don’t recall the theater being there…just trying to figure out the exact date. It’s too bad an independent owner didn’t take over. That area could use a cool theater.

The El Miro/Cine Latino closed around October 1987. So it must have been sometime in 1988. It was an independent theatre before Cineplex took over operations.

Looks like the status on this one should have been changed to closed/demolished a while ago. I will be around there tomorrow, but the posts from two years ago don’t leave much doubt.

ahh the Brentwood Twins, i lived right around the corner from the theater back in ‘82-83 and used to sneak in every night. I spent most of my life in this theater during those years watching “Blade Runner, The Thing, Empire Strikes Back (re-release) and everything else that played there those years over and over for weeks/months. It was the easiest theater to sneak into as the exit doors were always slightly ajar with generally few people inside. Cheap, run down, sticky floors, and the employees/floor staff were completely non present. I vividly remember during a late afternoon showing of "Sword and the Sorcerer” (which i also saw there a couple dozen times) a drug-connection friend of a friend i was with came thru the always-open exit doors right in the middle of the film, stood in the middle of the screen and started yelling out my friends name “Marc Maaarc..!!” Luckily there were only 2 or 3 other people in the theatre but it was quite embarrassing. Those were crazy days. Many memories of this theater.

I was the Projectionist at this theater for several years during the 80s. It wasn’t anything fancy, but it wasn’t a bad theater, and it did some good business as I remember. The staff was non present because there was a lot of partying in that place! The theater had Cinemechanica projectors, pretty good projectors in my opinion. Cinema 1 had a V-18 tower projector (13,000 ft reel), 2 had two V8 projectors (6 thousand foot reels, changeovers.) Back in the day the only theaters in Santa Monica were the Brentwood Twins, Wilshire Twins and the Aero. Both the Aero and the Brentwood twins were 2nd run, the Wilshire first run.

You forgot the Monica Twin.

Here is an October 1977 ad from the LA Times:
http://tinyurl.com/m4hapv

Here is a profile that was in the LA Times, also in October 1977:

Three months ago, proprietor Gene Rosenthal began showing older-often classic-films on one of his screens to complement the current commercial fare on the other. The result has been attendance from a cross-section of the community-senior citizens to youngsters-all drawn by programming that varies from science fiction to nostalgia.

The bill changes twice weekly and focuses on â€œin-depth classicsâ€, that is older films, rather then on the more current alternative movies shown at some of the other theaters. A recent Brentwood attraction was â€œMy Man Godfreyâ€ and â€œHis Girl Fridayâ€. There were also a few days of Harold Lloyd films. The theater was a bowling alley when Rosenthal took it over eight years ago.

My first visit to the Brentwood Twins was in the fall of â€™70, for the mind-frying double bill of â€œTrogâ€ (wacky missing link madness with Joan Crawford) and Hammer Filmsâ€™ â€œTaste the Blood of Dracula.â€ This was to be the first of many visits to this no-frills but family-friendly neighborhood twin, where if I recall correctly Screen I (to the left as you entered) was the smaller house. As was common in the early â€˜70s, local movie houses sometimes offered the same grindhouse fare found in urban markets, and the Brentwood was no exception. Over the next seven years or so the venue hosted such psychotronic classics as the British terror anthology â€œTales that Witness Madness,â€ the Stella Stevens horror-comedy â€œArnold,â€ the cult cannibal shocker â€œThe Folks at Red Wolf Inn,â€ Piper Laurie as â€œRuby,â€ Hammerâ€™s â€œCaptain Kronos: Vampire Hunterâ€ with â€œFrankenstein and the Monster from Hell,â€ William Castleâ€™s â€œBug,â€ the Borgnine/Shatner/Travolta glop-fest â€œThe Devilâ€™s Rainâ€ (paired with Hammerâ€™s â€œThe Devilâ€™s Brideâ€; give that booker a cigar!), â€œStraw Dogs,â€ â€œBreakheart Pass,â€ â€œDeath Wish,â€ â€œFreebie and the Bean,â€ Ron Leibman and Beau Bridges in the forgotten â€œYour Three Minutes Are Up,â€ the Burton/Taylor/Bridges oddity â€œHammersmith is Out,â€ Peter Sellarsâ€™ hospital laff-riot â€œWhere Does It Hurt?,â€ Omar Sharif in â€œThe Mysterious Island of Captain Nemo,â€ â€œBilly Jackâ€ and the unforgettable â€œMandingo.â€ Mainstream hits with repeat bookings included â€œThe Poseidon Adventure,â€ â€œThe Hot Rock,â€ â€œChinatown,â€ and â€œJeremiah Johnson.â€ I was spellbound by two great French thrillers when the theatre entered its art house/revival phase in â€™77 and showed Clouzotâ€™s â€œThe Wages of Fearâ€ with â€œDiabolique.â€ I believe the prints were 16mm, but I was terrified nonetheless. In either late â€™81 or early â€™82, it seemed that someone at the theatre was eager to support the areaâ€™s up and coming acting talent: when â€œTapsâ€ played, below the title the marquee read â€˜Sean Penn as Dwyerâ€™. What corporate multiplex these days would give that kind of shout-out? My last visit was in â€™88, for a near-empty screening of â€œThe Untouchables.â€ Before long the Brentwoodâ€™s doors shut for good, closing another chapter in friendly neighborhood moviegoingâ€¦