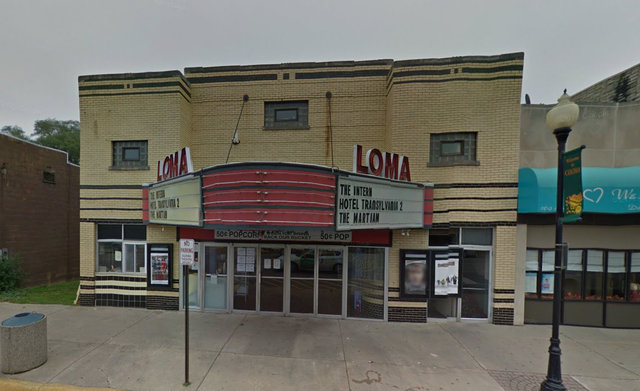 Opened in 1935, a conversion of a garage, the Loma Theatre was destroyed by a fire on April 25, 1943. A new Loma Theatre was built on the site, designed by architect Homer Harper, which opened June 15, 1944. It closed in 1959 and was used as a furniture store.

It was refurbished and reopened in March 1964 with Tom Tyron in “The Cardinal”. It has now been divided into three screens and is operated by Moore Theatres.

Here is another photo:
http://tinyurl.com/zbnqa

Here is part of an article dated ¾/64 from the Benton Harbor News-Palladium:

COLOMA â€" With the playing of the Star Spangled Banner, scenes of the United States passed across the screen of the new Loma Theater and motion pictures returned to Coloma last night after a four-and-one-half ear absence. A special showing of Elia Kazan’s “America, America” was the feature film shown to a special audience invited to the grand premiere opening of the theater, restablished in the city by Jack Lalo, new owner-manager.

Mr. and Mrs. Lalo welcomed dignitaries and citizens of the area to the theater. The Coloma High School band provided music for the event. In a short program before the showing of the film, Coloma Mayor Glenn Randall presented a proclamation to the Lalo family to commemorate the opening of the newly-remodeled theater.

Lalo purchased the theater building from from Tom DeRosa last year. DeRosa had used the building to house a furniture store after the theater was sold four and half years ago by Ethel Kilmark, who had operated the movie house since 1935. The Loma was started in 1913 by Dr. W.A. Baker. Mr. and Mrs. Clinton Alguire operated the theater until 1935.

Lalo had the inside of the thealer remodeled, installing new seats, projection equipment, carpets, wall coverings, screen and other details. Until the purchase of the theater, Lalo, a graduate of the University of California at Berkeley, was an employee in the research laboratory of Whirlpool Corp.

The Loma Theatre was rebuilt in 1944 following a disastrous fire the previous April. The delay was the result of wartime restrictions on civilian construction projects. The January 6, 1944, issue of The Film Daily said:

“Approval was granted by WPB also for construction to replace a burned theater at Coloma, Mich., With Mrs. Louis Alquire permitted to erect a new 584-seat house. The fire there occurred last April, too. Coloma, site of several important food processing factories, is now without pix facilities, and the theater has served, in fact, as the only public hall in the town. Omission of marquise was recommended. Booth and sound equipment is on hand, with opera chairs to be second hand and rebuilt. There is no great difficulty on materials or labor, and utilities connections are available.”

The facade treatment of the Loma Theatre is quite similar to Homer Harper’s State Theatre in Benton Harbor, except the State’s original brick has been covered up with one of those (probably aluminum) false fronts so popular for cheap remodeling jobs in the 1960s and 1970s. 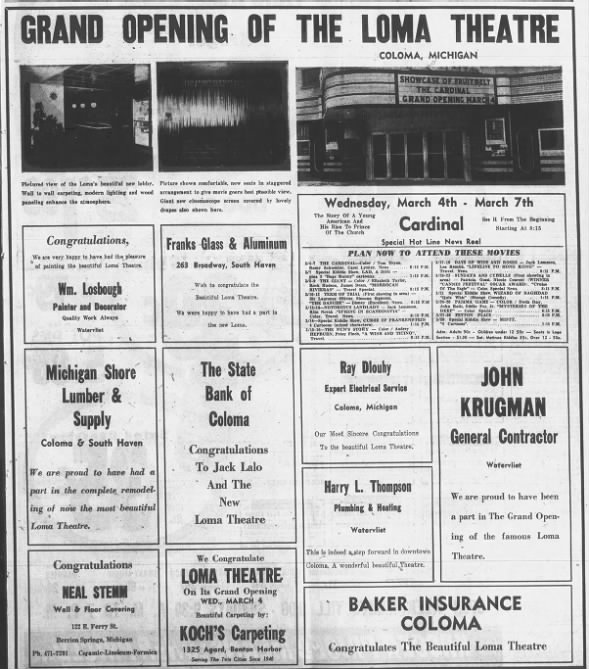