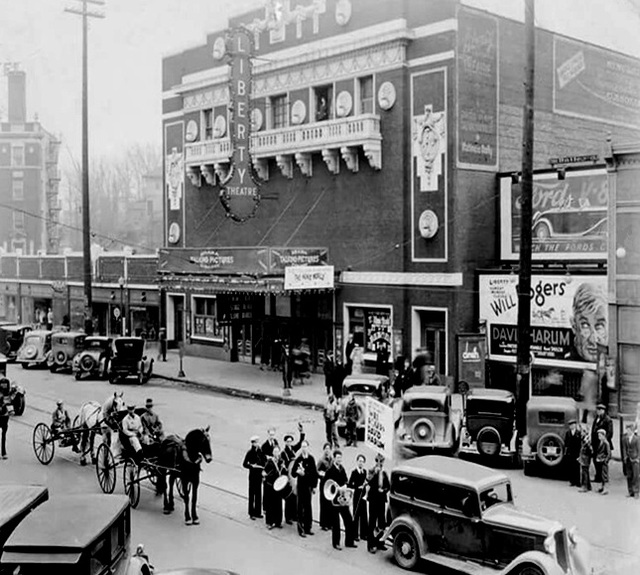 It was demolished in the 1990’s after the roof collapsed.

The Benton Harbor News-Palladium reported on the closing of the theater on October 29, 1972. Here is an exceprt from the 10/24/72 article as well as a photo from that day’s issue:
http://tinyurl.com/9zf2p5

The â€œlast picture showâ€ will play Sunday, October 29, at the Liberty Theater in Benton Harbor. That isn’t the title of the film, but the curtain will drop for the last time on the Liberty under the operation of Butterfield Theaters.

Butterfield will leave the Liberty as an operating theater â€" fully equipped and ready to go. Edward David, president of Highland Building Corporation, said he is hopeful of finding a new tenant to continue operation as a theater. Himes, Liberty manager since 1950, said he will remain with Butterfield as supervisor of a group of theaters in western Michigan. Butterfield operates 50 theaters in the state. Himes will continue residency here for the present.

The Liberty has been a Benton Harbor landmark at 212 East Main Street since it opened in 1922 â€" the days of vaudeville and silent films. “Talkies” arrived in 1929 when “Submarine” drew a record single day crowd of 7,000 as the first “sound” film at the Liberty. The Liberty has been remodeled several times to keep abreast of cinematic technology and provide comfort for the audience to make it one of the top showplaces in western Michigan.

Nostalgia buffs will remember it as a theater where stage shows and movies appeared on the same billing, where Blossom queens were crowned, where “Gone With The Wind” was first shown in this area.

Here is an April 1950 ad from the Benton Harbor News-Palladium:
http://tinyurl.com/r76jqe

An item in the April 16, 1973, issue of Boxoffice said that “[t]he city commission has approved the reopening of the Liberty Theatre by new owners, subject to the completion of inspection and certification by the building inspection department.” I haven’t found any later items about the theater, but it’s possible that it did reopen for a while.

The March 26, 1921, issue of The American Contractor said that Chicago architect Paul T. Haagen had prepared plans for a 1,500 seat theater to be built at Benton Harbor for Fitzpatrick & McElroy. It must have been the Liberty, which the February 18, 1922, issue of Exhibitors Trade Review reported had recently been opened by Fitzpatrick-McElroy Company.

This opened on February 4th, 1922. Grand opening ad in the photo section.