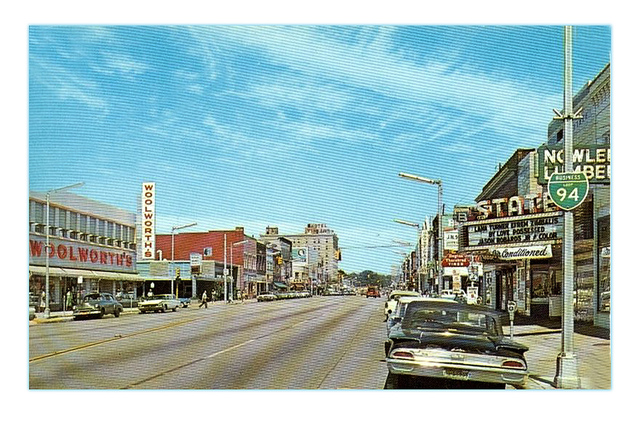 The Art Moderne-style State Theatre, located on Main Street near Colfax Avenue opened May 14, 1942 with Gene Tierney in “Sundown”. It was operated by the Butterfield chain until the 1960’s. In February 1967 it was taken over by Fox Eastern Theatres Corp.

During the 1950’s and 1960’s, it was one of four theatres open in Benton Harbor, along with the Liberty Theatre, City Theatre, and Lake Theatre. But today, only the State Theatre remains standing, although the theatre is currently closed.

Hi and sorry to disappoint everyone. We worked since October to continue operations and renovations to the theater. We had a three year plan to restore it to it’s origninal look. However, we could not(for whatever insane reason) come to any agreement with the owners of the theater (12 in all). We originally quit high paying jobs in CA to invest and realize this dream. We had a very loyal and growing following, but the owners breached their contract several times and did not respond to us continuing operations of the theater. Long and very sad/frustrating story. The theater needs to be occupied in order for it to survive. We have done all we could and as of yesterday had to hand over the keys. We took all of our improvements with us (about $50K worth) and will be trying to sell them at discounted prices to others theaters in need. If you want to contact me, my email is We are so sorry and devastated as to how this turned out. We will keep our eye on it and hope it does not collapse like the Liberty theater did a few years ago. The theater was beautiful inside before we moved out last week and the films we showed there were classics that must be seen on the big screen. Pray for the theater…it is the only historic theater of the 4 that existed on main street.

Here is part of a 2/22/67 article from the Benton Harbor News-Palladium:

The Twin Cities' version of Balaban & Katz today turned over his theater properties to another firm with a time honored movie name. Harry Rubin announced he has leased the State, Starlite and St. Joseph Auto theaters to Fox Eastern Theaters Corp,, which is part of the second largest movie house circuit in the U.S.

Rubin said he is planning a year of semi-retirement and a lot of travel with his wife. Sometime during these trips he will decide on future business plans and location. Fox Eastern, based in New York City, is an offshoot of 20th Century Fox and a subsidiary of National General Theatres Corp. of Los Angeles, whose holdings cover 250 theaters, including Graumanâ€™s Chinese and Cathay Circle. Fox Eastern presently operates 14 theaters with six more under construction.

Rubin came to Benton Harbor from Michigan City in 1948, when some obituaries were being written for the film industry. He took over the State and City theaters. The City was a small shoot ‘em up action houseâ€"a medium that virtually has vanished in the U.S. While it fell victim to television and the outdoor theaters, the State prospered. Rubin continually improved the theater on West Main street, and the last remodeling in October 1965 dressed it into a plush place with push-back seats. His promotional flair was just as evident in the outdoor Starlite acquired in 1955, and the St. Joseph Auto theater, purchased in 1960, and the location of a drive-in restaurant that opened last summer.

Bob Smith, vice president of Fox, said no major changes are planned in the operation of the three Twin Cities theaters. Tom Meredith, who joined Rubin two and a half years ago, will remain as supervisor for Fox.

Hello, Does anyone have any info on the current owners or current plans? We are VERY interested. Any info would would be great! coolate (at) gmail.com

From the 1960s a newsprint photo showing the State in Benton Harbor.

Don Lewis’s photo shows that, behind that ugly false front, the State Theatre has nice, decorative brickwork similar to that of Homer Harper’s Loma Theatre in Coloma, though the State also had a bit of ornate decoration now concealed by the angled sections of the false front. This would probably be a very handsome building if that ill-advised remodeling, which was probably done in the 1970s, would be undone. 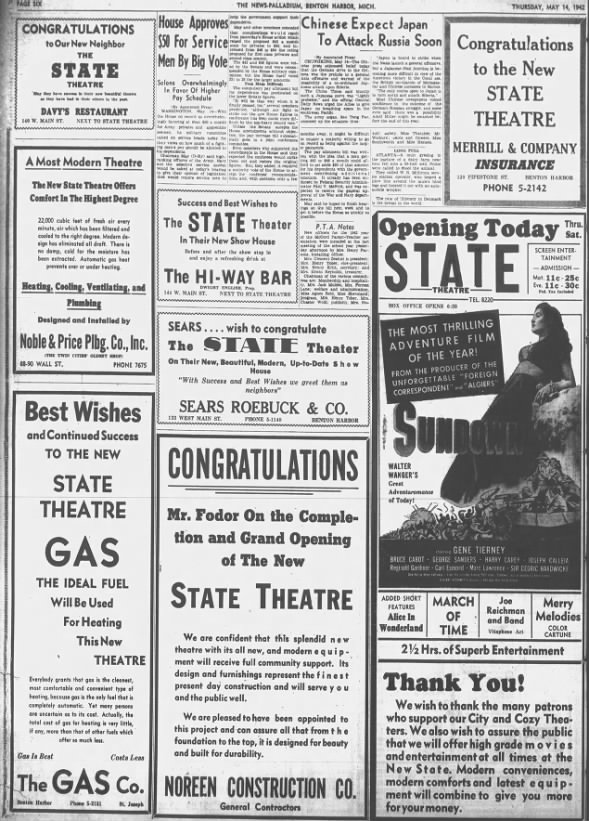 This opened on May 14th, 1942 Grand opening in photo section and above