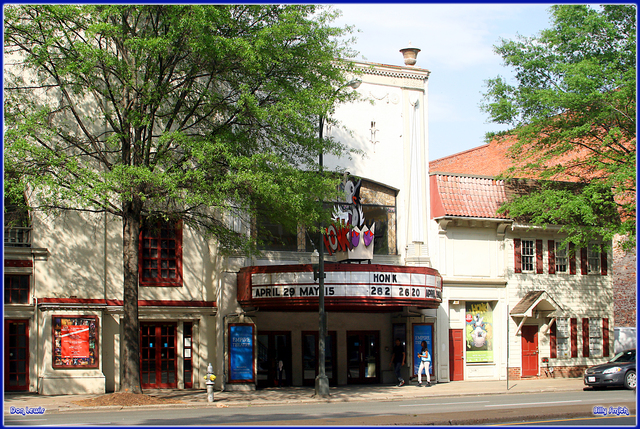 Opened as the Empire Theatre in December 24, 1911, a legitimate live theatre where artists such as Lucille LaVerne and John Bunny appeared on stage in a stock company. It closed in 1915, later to re-open the same year as the Strand Theatre and continued until it was damaged by a fire in 1927.

It lay empty for several years until 1933 when it was taken over by Lichtman Theatres and re-opened as a movie/vaudeville theatre known as the Booker-T Theatre catering for ‘Negro’ audiences. The opening movies were “I Cover the Waterfront” starring Claudette Colbert and “Flying Down to Rio” featuring Fred Astaire and Ginger Rogers. Movies continued at the Booker T Theatre until 1974.

It lay empty again for several years until it was purchased by the Theatre IV Theatre Company, in 1984. They undertook renovations and improvements to the building (including taking over the former Walker Theatre next door, to use as additional dressing rooms and rehearsal space) and now present stage perfomances for children and family audiences. In 2012 it was renamed November Theatre.

I may be mistaken but recall seeing a live concert here in the mid 1980s. Gang of Four headlined with R.E.M. opening.

A TWO MILLION DOLLAR grant by Mr.& Mrs.November will facilitate a total renovation of facade.

Y'all need a better pic,not blocked by buses.

A permit was issued in 1910 for a theater located on Broad Street between Jefferson and Brook Avenue, but the name on the permit was Star Theatre. Still, it was being built for M. L. Hofheimer, who was the original owner of the Empire Theatre. The project was designed by C. K. Howell of the firm of Scarborough & Howell, Engineers & Architects.

Howell also designed the smaller movie theater next door, now the Walker Theatre, for Hofheimer the following year. It is very likely that the 1910 Star Theatre project was the house that opened in 1911 as the Empire.

Hello. I joined this site so I can find clarification on something about the Empire Theatre in Richmond. I hope please that someone can help me.

I lived in Richmond in the 1970s, leaving in ‘79 (I’m now in New York area). I was recently searching online for info regarding the re-opening of the Empire around 1977, but it seems like all the information I’ve found seems to not mention this event, and even suggests the theatre was not re-opened until around 1980. I know for a fact that the theatre reopened at that time, because I worked on the launching of the restored venue, and I also attended a couple performances at that time there (Dave Brubeck, and The Eagles). The place was wonderful, I thought for live music such as these acts. However, naturally I’m curious why this “era” seems to be omitted from the various histories of the theatre I’ve been able to find.

Some background: I did some work for a small ad agency in Richmond as an art director in the late 70s, and one assignment was to do a couple illustrations and ads for the restoration of the Empire Theatre at 118 W Broad Street. I still have the original illustrations in my files, as well as photocopies of the two advertisements which ran I’m sure in the Richmond Times Dispatch (I could post somewhere if you like). The ad copy (I did not write) speaks of restoration of the venue to its original billiance, mentions things like “architectural classic” and that “the era of elegance and grandeur is now brought back…”; that performances “will range from Symphony and Opera to contemporary artists”; as well as mention of historic performances once on the theatre’s stage by Kit Carson, Mary Pickford, Al Jolson, Wallace Beery, etc. The ads acknowledged that the theatre’s name a various times had become the Strand and then the Booker-T.

Obviously, since I left Richmond so long ago the theatre has survived in whatever iteration it now hopefully thrives in. Still, I hope someone on this string (thanks in advance) can acknowledge the existence of this 1977-era chapter.

Yes it did indeed reopen in 1977- my sister worked on it as well as some of her friends. I was at the reopening also. I’m not sure what happened between that time and 1984. Surprised it showed movies until 1974 because it was in terrible shape when we were there.

You’re right, chCinema, The Empire Theater was open in 1980 and 1984. (Or perhaps they just gave the band permission to use it.) I lived in Richmond during those years and the band, Single Bullet Theory, filmed the video for the their song, “Hang On To Your Heart”. I was there for the filming (as were several other ‘extras’ for their audience. Although the song was never released, there is a video of it, showing the inside of the theater (even though I could find no official info saying it was filed there—I know it was. LOL!) Here’s the link to the YouTube video: https://youtu.be/eI1mzx2o8Hs

This one is now known as the November Theatre, named in honor of Sara Belle and Neil November. Here is some information from the website:

The Sara Belle and Neil November Theatre opened as the Empire Theatre on December 24, 1911, and featured stars like Lucille LaVerne and John Bunny.

In 1927, a fire damaged the space, and it lay dark until it was re-opened in 1933 as the Booker T Theatre, which featured films and vaudeville performances until 1974.

Theatre IV purchased the theatre and its neighboring Walker Theatre (which later became the Little Theatre and finally, Theatre Gym) in 1986. Restorations were completed in 1990, and Theatre IV presented performances for children and families in the renovated space, which they renamed the Empire Theatre.