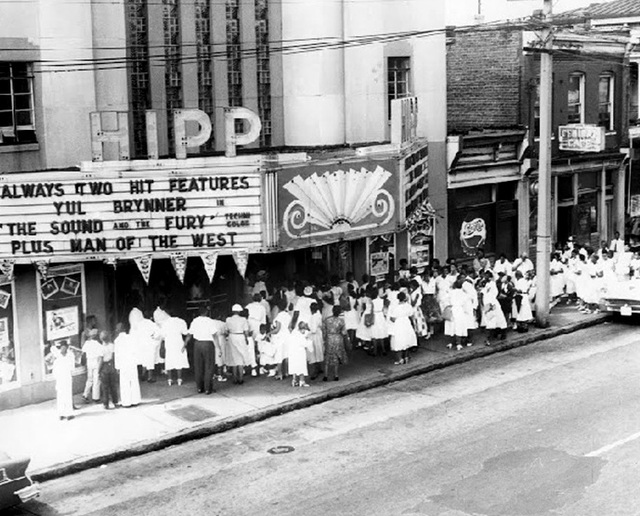 Opened in 1914 as a mixed use vaudeville and movie theatre, the seating capacity was 1,050. It is located in the Jackson Ward district and attracted a mainly African-American audience from the locality.

In the 1930’s and 1940’s it attracted big stars who appeared on the stage, such as Bill ‘Bojangles’ Robinson, Ethel Waters, Ella Fitzgerald, Ray Charles, Moms Mably and James Brown. It was acquired by the Abe Lichtman circuit in c.1935 and the Hippodrome Theatre was listed as being a ‘Negro’ theatre in Film Daily Yearbooks for many years.

In 1945 the interior was gutted when the building caught fire and the building was extensively re-built in an Art Deco style, designed by architect John J. Zink. It now had a slightly reduced seating capacity of 850, re-opening in 1946 when it became primarily a movie theatre.

The Hippodrome closed in 1967, re-opened again, then closed in 1970 to become a church. It re-opened briefly in 1982 but since then has remained little used and mainly shuttered. Renovation plans were started in November 2009 and the Hippodrome reopened in August 2011 as a live performance venue.

Here is your new information form the Local new of Richmond VA.
The long-awaited revival of the Hippodrome Theater in Richmondâ€™s Jackson Ward neighborhood could begin soon, with a $600,000 boost from Richmond taxpayers.

The historic theater and adjoining Taylor Mansion on North Second Streetâ€"once the center of African-American nightlife and entertainment in segregated Rich mondâ€"would open by April 2011 as a live-music venue and theater known as The Hipp, according to a proposal submitted to the City Council.

The $12 million restoration project has been approved by the Virginia Department of Historic Resources and would also provide residential and retail space, a restaurant and audio-video production facilities.

Though it was not clear last week who would operate the venue, Mayor Dwight C. Jones has proposed a development agreement that would provide $600,000 over two years to the property owner and developer, Hippodrome-Taylor Mansion LLC.

Jackson Ward developer Ronald Stallings, with Hippodrome-Taylor Mansion, did not respond to several messages. City administration officials also would not discuss the project, but Deputy Chief Administrative Officer Peter H. Chapman emphasized its importance in a memo to council members.

â€œThe Jackson Ward community is rich in African-American history and material culture and is strategically located as an economic gateway in downtown Richmond,â€œ he said. â€œThe Hippodrome Theater is a significant icon in that African-American cultural and economic heritage.â€œ

City officials have been talking with Stallings for years about reviving the Hippodrome, which was built in 1904 and rebuilt after a fire in 1945. James Brown, Ella Fitzgerald, Ray Charles and other black entertainers graced the stage during the theaterâ€™s heyday in segregated Richmond.

The Taylor Mansion was designed by architect John Lankford and built in 1907 for the Rev. W.L. Taylor, a leader of the United Order of True Reformers. The home was credited at the time with being the largest home of a black American in the United States, and it later became an Elks lodge.

In 2004, the council committed $800,000 to a plan that called for converting the theater and Taylor Mansion into a live-music venue and production facility similar to the Apollo Theater in New Yorkâ€™s Harlem. That deal never materialized, but last year the council set aside $300,000 in fiscal 2009-10 and $300,000 in fiscal 2010-11 for the Hippodrome project, described at the time as a blues club similar to ones named after guitarist B.B. King.

Councilman Charles R. Samuels, whose 2nd District includes part of Jackson Ward, said heâ€™s unfamiliar with the current plan but is tentatively supportive. â€œIt really could serve as a base or anchor for pulling development from Broadâ€ Street.

The proposed agreement calls for the city grant to be released in installments through 2010 as the project meets construction milestones. A certificate of occupancy would be required by March 30, 2011. The city would be entitled to a reimbursement if the project isnâ€™t finished by Sept. 1, 2011.

In addition to the city funding, the project would be financed with $2.8 million in state and federal tax credits, $4.7 million from investors and $3.8 million in debt financing, according to Chapmanâ€™s memo.

The project is expected to generate 42 full-time and 40 part-time jobs, and $300,000 annually in real estate and business taxes once itâ€™s fully operating. The council could vote on the agreement as early as Nov. 23. Itâ€™s requested for the councilâ€™s consent agenda, meaning it could be approved with little or no discussion.

You now can check out our blog at http://thehippblog.blogspot.com/ for the current construction of the Hipp and the Mansion! We are now trying really hard to do it as good and as fast as we can to bring these buildings back to life. We can’t wait for the grand opening in Feb 2011. Thanks for your support of our Jackson ward community.

Amy,your site is great.Thanks for the tip.Can’t wait for the finished project to change the area for the coming generations.

@ghamilton Thank you! We are so grateful for the opportunities that we have to rebuild the history for the community for coming generations as we believe that the Hippodrome and the will be here to serve Richmond way past our generation and so on.
The correct address of the Hippodrome theatre is 528 N.2nd St. Richmond, VA 23219.
Stay tuned for the new weekly renovation updates on our blog at http://thehippblog.blogspot.com

A permit for the Hippodrome Theatre at 530 N. Second Street was issued by the City of Richmond in 1912. The architect for the project was Charles H. Fisher of Fisher & Rabenstein, Architects. The project was commissioned by Mrs. A. E. Thorp.

The history section of the Hippodrome’s official web site says that the house opened in 1904. If that’s the case, then the 1912 permit must have been for alterations to the theater.

Another permit was issued for the Hippodrome Theatre in 1946. The architect for this rebuilding, commissioned by Lichtman Theatres, was John J. Zink.