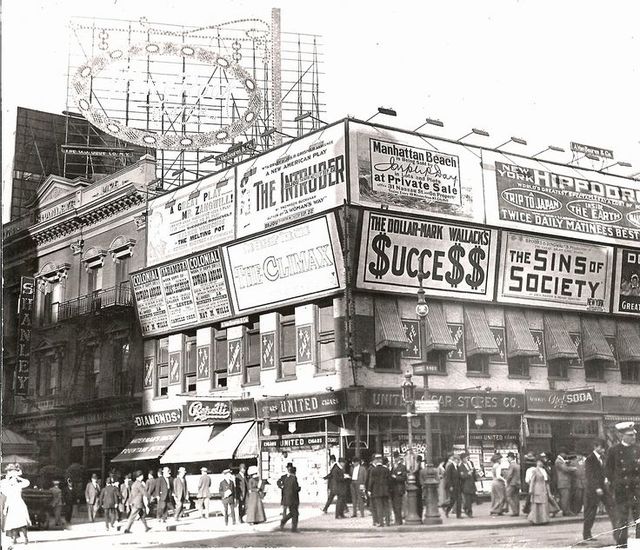 Located on 7th Avenue and W. 41st Street in Manhattan. The Stanley Theatre was opened around 1914 with 800 seats. In the early-1950’s it specialized in Russian films. It was demolished in 1956.

Another ad for “Ravaged Earth”

hello,
I am writing from France. My father, produced a film “Les clandestins” which was shown at the Stanley in NYC in 1948. Could anyone help me in finding the american adds of the film ?
thanks

Demolition was announced starting on January 2, 1956 when the Stanley and the National Hotel were both to be replaced by a 15 story textile industry building that has apparently since been demolished as well.

I am glad to see this movie house is already identified as a communist sympathizer house as I found this movie ad in my trusty May 10, 1946 NYC edition of the (Communist) Daily Worker (reading from top to bottom various type size):

In November 1948 the Italian film The Spirit and the Flesh premiered at the Stanley. It had been made in 1941 and was based on the great Manzoni novel, I promessi sposi.

This is from Boxoffice magazine in November 1947:

By the way, did you see the Yiddish film that was playing in Warren’s ad of 2/19/08? There was some diversity in this theater.

Sorry, that ad was from Gerald DeLuca, not Warren.

Mark Rivest has the only photo I have seen of the Stanley marquee. Check page 63 of his Manhattan collection.

This earlier comment by AlAlvarez says that the Stanley was showing movies as early as 1916. Its age, and the fact that it is the only theater listed for this stretch of 7th Avenue, makes it more likely that it was the theater in this item from The American Contractor of July 5, 1913:

W. H. Hoffman was, of course, the senior partner in the Philadelphia architectural firm of Hoffman & Henon, specialists in theater design.