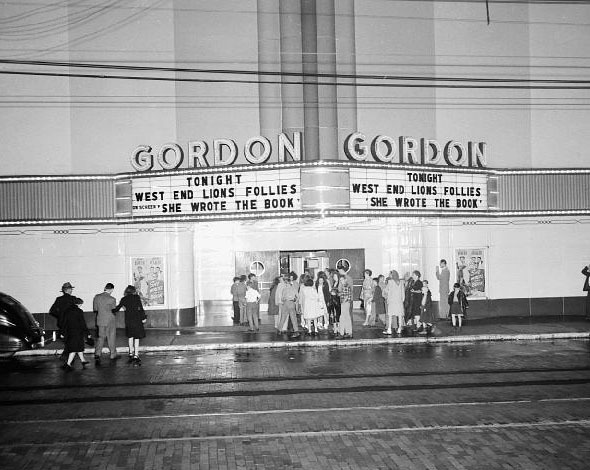 It is interesting to note that the East Point Theater also was only opened on the weekends before it closed.

Back in the 1940’s, the Gordon was a rather elegant neighborhood theater, featuring plush seats (some of them built for two). Either side of the stage were huge sculptures of Native Americans or other tribes. I spent many happy days at matinees there, seeing films such as “Holiday Inn”, and “Blue Dahlia” .

Once my brother and I sat through three showings of “Song of the Islands” with Betty Grable.

This was one of at least three theaters that Lucas & Jenkins built in 1940 in Atlanta.

The article indicates the Gordon was 1,300 seats when built. The Little 5 location was the Euclid (now Variety Playhouse) and if you look at the photos linked above you can see a definite similarity between the Gordon’s design and that of Variety.

The third location described is where the downtown connector & Georgia Archives are now, so it no doubt is long demolished.

saw lots of movies at the Gordon.. my dad used to take us to the movies there a lot… and it was one of the rare air-conditioned buildings back in the ‘50’s. And I especially remember “Thunder Road”… My dad had just bought a new 1957 Ford, and had traded in his 1952 Ford, both featured cars in the movie.

“On the first of April, 1954 The Federal man sent word He’d better make his run no more… He’d have a thousand agents a'coverin the state, whichever road he tried to take they’d catch him sure as fate….

Son, his daddy told him, make this run your last you’re all filled up with hundred proof, you’re all tuned up and gassed… Now don’t take any chances if you can’t get through I’d rather have you back again than all that mountain dew"

After watching the movie,NIGHT OF THE LIVING DEAD,at the Gordon,I was terrified,leaving the theater after dark,the walk to our home in Adair Park was one of the most frightful moments of my childhood rearing in the West End of the beautiful Atlanta Ga.,Walking “down” Gordon St.[east] toward the railroad overpass I would cross the street to avoid the alcove doors of the shops,so afaraid the Zombies were going to get me any minute,I waited in front of The Krispy Kreme until an adult walked toward the underpass in front of me so the zombies would eat them first and I could run away;

hello friend, my name is Ronnie Ratley.My family moved to west end in 1958.I attend peoples street school and lee street school, and attended Brown high. I worked at the Gordon Theater as an usher and had a host of friends, Mike Cantrell, Kenny Strickland, Tommy Waters, Buddy Parker, June Pittman, Sandra Hood, Donna Price, Kay Peavey, Jenny Dorsey, Robin Dorsey,and Ronnie Hayes Just wondering if anyone out there know any of my old friends.I lived there as a child when there was a Sears woolworth, Thomas restaurant. The Gordon Theater was my second home I rode through west end several years ago and it made me sad to see what it has turned into. There ws soo much happiness there at one time everybody knew everybody I lived on the corner of Gordon and Peoples street across from Howell Park.