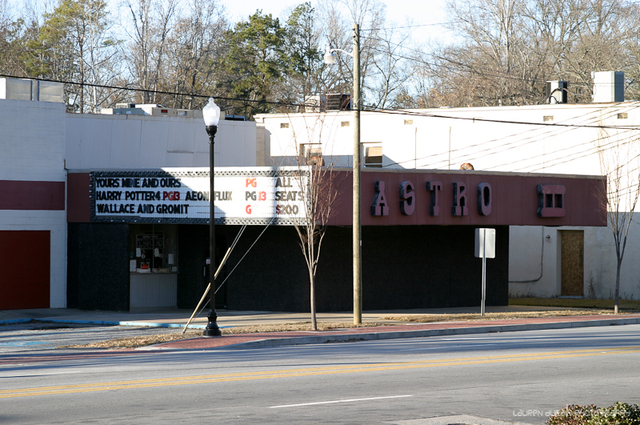 The Astro Theatre opened in January 29, 1971 as a single screen theatre. It was the modern replacement for the Clemson Theater a few blocks up the road. In the 1980’s, two more screens were added to the theatre with more modern sound capabilities. In the 1990’s, an even more modern theatre opened in the nearby town of Seneca. At that point, the Astro III started showing first and second run movies at a discount rate. Despite the newer theatre, the Astro III still did excellent business due to its proximity to the Clemson University campus.

A picture of this theater is here.

Anyone know who is the landlord….It gives the town (i live 2 min a way from) but no name???

Here are some clarifications that might help: The Astro III opened in January 1971, screening ‘Tora Tora Tora.’ Initially, admission was not by ticket, but rather by a coin inserted into a turnstile. Student admission was $1.25. The facility was state of the art at the time, with Simplex projectors, bearing 6,000 foot reels each, and equipped with xenon lamps. Seating was about 347, rocking chair style, with gold carpet on the auditorium walls, red carpet on the lobby walls and black acoustical tiles in the ceiling. A black velvet traveler covered the screen when the show as not in progress. Oddly, in this ‘space age’ theater, the lobby featured a golden Zodiac sun dial of sorts, above a minature replication of Michaelango’s David. Astro III was not opened by Martin, but by Star Theaters in Greenville, which operated the Plaza, on Augusta Rd. in Greenville, and the Clemson on College Ave. In early 1968 both received an upfit. Star also opened the Astros, and later sold all four to Martin, (later Carmike) in 1972. The house manager of the day would double as business manager, operator (projectionist,) and work the concession stand, alongside another (usually a college student) who would handle the box office and concessions. Two employees could staff it all during the week, with three or four as the full complement on weekends. Sellouts were not at all uncommon, averaging six to 18 annually. Midnight Man, filmed in early spring 1973, premiered at three different theaters on the same evening in June 1974. Early evening it premiered at the Osteen in Anderson (near where portions of the film were shot) and the Astro III in Clemson. Co-producer Roland Kibbee and female lead Susan Clark were on hand for the Clemson premiere. There was but one screening that evening. Following the opening credits in Clemson, Kibbee and Clark traveled to Greenville, for the premiere held at the Astro I later that evening. Burt Lancaster was at neither premiere. If anyone requires more details on specifics, they can easily be supplied.

I think the additional screens were added earlier than the ‘80s.

Here’s a pretty remarkable photo of a personal appearance by Chewbacca at the Astro III in 1977 or so (I’m not certain that this mask was available before 1978, but STAR WARS played there for at least three separate runs before EMPIRE came out): View link

Um…actually you both are wrong. Back in 2000 My best friend was telling me aabout a place called The Astro being atechno dance rave club they had every friday and sat nights I know they wouldn’t let someone rent it out or something every weekend when you said it was still the movies there. I was going to go to the astro my friend wouldn’t let me cause girls were getring rapped there because they were in cages dancing with no panties on . Then a week later I remember watching the news with my folks that someone got shot and killed in the astro. If you don’t believe what I am saying go to Carolina news archives I’m sure they would have a record of that. So in 2000 it was turned into a dance club like the millennium dance club that I used to go to myself back in the day. Lol people of astro would go to millennium when astro closed at 3am millennium always closed at 6am…I hope I helped you some on my experience with the astro lol

This opened on January 29th, 1971. Grand opening ad in the photo section.