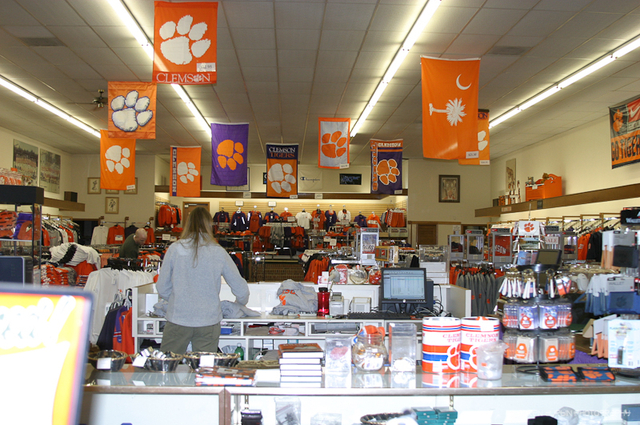 The Clemson Theater was the first theater in the town of Clemson. It was located in the heart of downtown Clemson. The theater closed sometime in the middle 1970s as it was replaced by the more modern Astro theater down the road. During the brief time that its operation overlapped with the new Astro, the Clemson theater showed unrated or X rated flicks.

The old theater is now being used as a college apparal store. The interior was not significantly altered, and it is easy to tell that it was once a theater. The original marquee still remains.

A picture of this theater is here.

The link posted above has a series of interior and exterior photos:
http://tinyurl.com/odnxu

A 1986 view of the Clemson Theater building in Clemson.

The Clemson Theater was open into the early ‘80s; the last film I can say with certainty that I saw there was THE ROAD WARRIOR in May 1982 (my father took me, even though it was in the middle of final exams for the year). Mr. York, the manager, then moved down the street to the Astro III.

I saw Tron at the Clemson Theater in the later half of 1982. That was among the last movies shown there. I’m not sure it showed “X or unrated” films prior to that. It would have been pretty unusual for such a theater to be in the downtown of a small SC town then. It would be unusual today as well. Remember, this it was within sight of the university.

The Astro III, about half a mile further down College Avenue (with three screens) put the theater out of business. The Astro was always pretty “modern” when I was a kid and I remember the small Greek statues inside. The Astro was put out of business a generation later by the big megaex theaters first in Seneca, then another out by I85 between Pendleton and Anderson.

Gotta love the internet… wonderful links in the comments here. :(

Circa 1961 photo added via Jim Mulso.