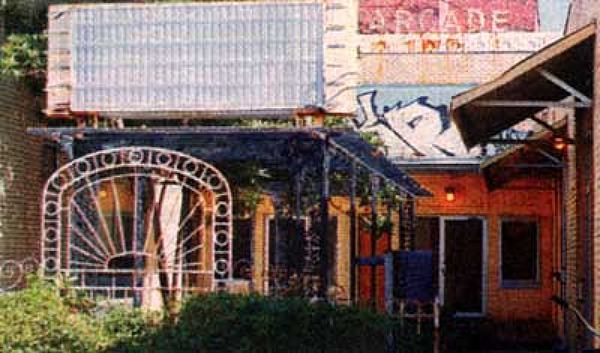 The Arcade Theater designed by architect Augustus Constantine, opened on January 10, 1949. The Arcade Theater closed and became a gay nightclub around 1984 until 1997. The building was then purchased by the College of Charleston in 2000 and used as classrooms and offices. The building has since been demolished. Click the link below for more background on this former theater.

It was a pretty cool nightclub when it was opened. HUGE space with many rooms and a two level dance floor area. Shame that the college bought it out and opted to bulldoze it down.

When I was a child, it showed art house films. At some point in the late seventies, it switched over to old movies. The other Pastime Amusement theaters downtown were for first and second run films. The Arcade showed Marx Brothers and Bogart and the like. It was a fairly small place; the auditorium had beige curtains, so you couldn’t see what was originally on the walls. The club: it was called The Arcade, then Spanky’s Arcade, then simply Spanky’s. I wouldn’t call it a gay club, so much as a new wave one. I believe it was a restaurant after that, too.