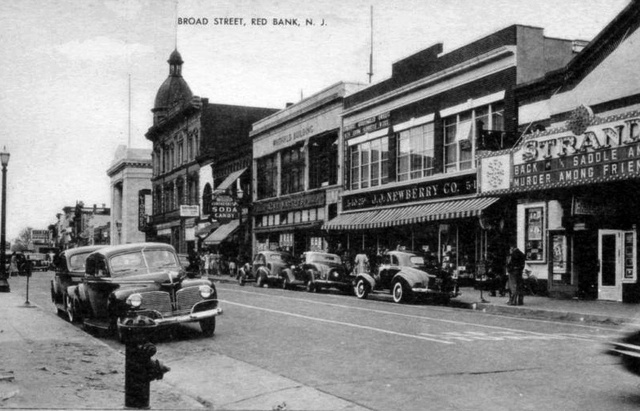 Operated by Joseph Stern as of 1925. This theater was closed in 1950, although it is still listed in the 1951 FDY. Immediately thereafter became a department store. Now occupied by Merrill Lynch.

A Robert-Morten organ was installed in this theater in 1921.

A close of up the horizontal marquee (not visible in the main entry link) can be found on page 183 of “Greetings from New Jersey: A Postcard Tour of the Garden State”. The marquee reads:
BACK in the SADDLE AND
MURDER AMONG FRIENDS

Both of these films were released in 1941.

First opened in 1917 with Poor Little Rich Girl as its first feature movie. Danel D. Dorn was the first projectionist. Located on NE corner of Broad St. and Borden Street (now known as Linden Place). Immediately after closing became a Lerner’s store. In 1991 a Merrill Lynch office was constructed at the site, and there is very little left of the original building. During contruction old wall murals were discovered by not salvaged.