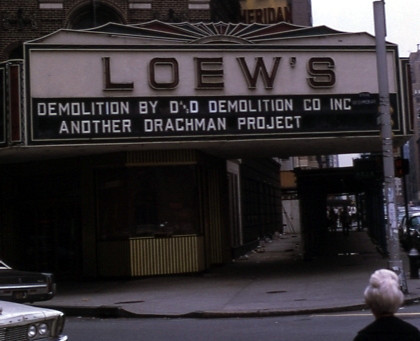 This 2,342-seat theatre was located at 7th Avenue and W. 12th Street, in the western portion of New York’s famed Greenwich Village. It was opened as the Mark Strand Sheridan Square Theatre on September 17, 1921, and was taken over by Loew’s Inc. in December 1926.

After years of light attendance, the balcony was closed and soon, the theatre itself was shuttered on June 17, 1969 with Rock Hudson in “Ice Station Zebra”. That same year, St. Vincent’s Hospital, located across 7th Avenue from the Sheridan Thetare, purchased the theatre’s triangular lot, with the intention of building a nurses residence. The hospital demolished the theatre in August 1969, but the land wound up being used as a community garden.

Today, nothing remains of this theatre. The lot is still in use by St. Vincent’s, but simply as a receiving station for various supplies. Yet another Loew’s movie palace that is but a ghost of its former self.

Although the theatre is gone, it was immortalized by Edward Hopper in his 1937 painting, “The Sheridan Theater” which can be viewed in the Newark Museum.

Link to Life magazine, then scroll through to page 57, 58, etc. (Just close the pop-up offer to join.) There’s a lot of interesting stuff in this special nostalgia issue.

The url in my comment above has changed to https://commons.wikimedia.org/wiki/Category:Loew%27s_Sheridan_Theatre,_Manhattan

Neither link appears to be working

The second link at least works, didn’t try the first. Seems when posting a link to CT, it has to be in html code to be clickable with a mouse. Otherwise, you have to cut and paste the link. A younger coworker taught me the code recently (not that hard), so I’ll transpose below. You should see three vintage b&w photos of the Sheridan.

Got it. Was pleasantly surprised when I visited MOMA in NYC earlier this year and came across a Hopper painting of the Sheridan interior. Great theater back in the day.

A couple photos of the Sheridan in this recent Hopper video piece by the Whitney Museum of American Art. Copy & Paste to view.

Thanks for the link, David. Particularly liked seeing the poster and seeing Lon Chaney and William S Hart playing at the Sheridan.

I have written on this cinema. See: http://westviewnews.org/2015/04/the-lost-cinemas-of-the-west-village-the-sheridan-theater/

They just turned the lot into a public park. Soon it will be completed with an AIDS Memorial wall.