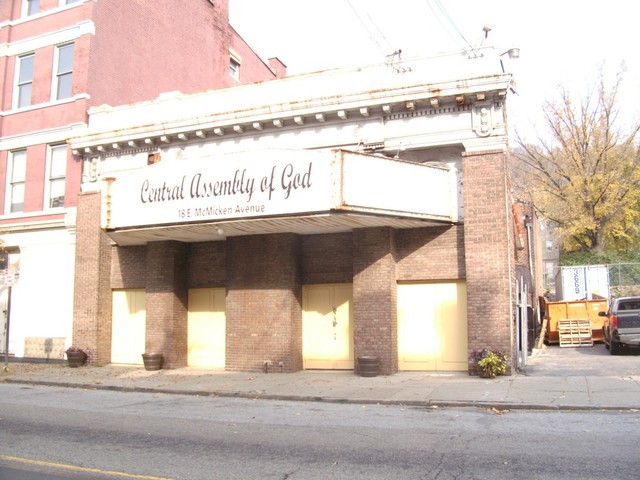 Opened as the Variety Theatre in 1913. Around 1930 it was renamed Uptown Theatre. This was a second-run movie house in the Over-the-Rhine section of Cincinnati. It was operating into the 1960’s.

A minor point (and not relevant to the theatre discussion), but if Tim Lucas is still around, someone might let him know that he was paying six bits), not three bits, for his movie tickets. A quarter was two bits, and thus the once-common phrase “two-bit grind house” arose to describe theatres showing triple features all day and night for a quarter.

of course, i recall the Uptown… saw a few films there, but when young , my theatre (and neighborhood) was the Empire… I guess there was no “marquee” overhanging sidewalk, but there were theatre posters, and ads in the paper (in the long gone ‘Neighborhood Theatres" section to let you know what was playing and when. In 1995, I met a woman whose father managed the Uptown theatre in the sixties… she herself sold tickets and worked the concession stand as a teen. Wish I had asked her more questions about place. Met another woman at time, who remembered area when it was a “good” neighborhood… she always attended the Uptown, rather than the Empire – said the Uptown was “cleaner!” Rather prim and proper, but very nice lady.

I remember the Uptown in the ‘60s. I remember the vertical “Uptown” sign over the marquee. That’s about all I remember about it until it closed and it became a church of sorts. This is another one in which I can not find a photo of any kind. Anyone have one???

This is the Uptown Theater as of two hours ago. ;–)
View link

Here is an item announcing the plans for this theater in the October 30, 1912, issue of The American Architect:

“Architects Rapp, Zettel & Rapp, Johnston Bldg., have completed plans and estimates for the erection of a brick and concrete amusement building at 18-20 E. McMicken Ave., between Vine and Walnut Sts., to be known as the Variety Theater, at a cost of $12,000.”

The November 20 issue of the same publication had an item about another projected theater designed by the same firm:

Uptown Th. started as The Variety th. in 1913 according to our City Directory at 18 East Mc Micken. The name changed to Uptown Th. around 1930 when perhaps the new owners took over.

As a child, from 1943 til about 1948 I would attend the “cowboy westerns” every Saturday. ( The movies for “grown-ups” would start after 4PM.) The cost was ten cents for the double features held each week. Roy Rogers, Gene Autry, Sunset Carson, etc..

To the right of the theater , now a vacant lot, was a neighborhood bar.

The Cincinnati architectural firm of Rapp, Zettel & Rapp operated from 1903 through 1912. The principals were George W. Rapp (not to be confused with Chicago architect George W. L. Rapp), his son Walter L. Rapp, and partner John Zettel. Among the firm’s projects was a 1909 factory for the Rudolph Wurlitzer Company at Tonawanda, New York. From 1913 to 1930, the firm became Rapp & Zettel, and from 1931 until Walter Rapp’s retirement in 1958, Rapp & Meacham.