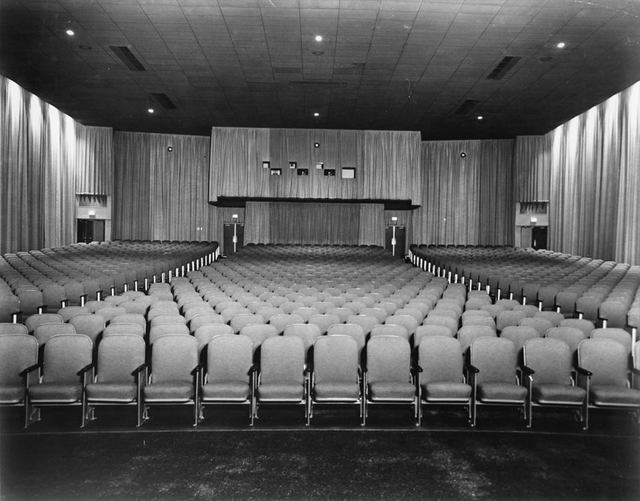 The Melody Mall Shopping Center was built in late-1969. The Loews Route 18 Theatre was at first a single screen that opened on March 4, 1970 with exclusive of screenings of “Cactus Flower” starring Walter Matthau. Seats, curtain, and lobby wallpaper designs like that of the remodeled Loews State Theatre in NYC, with lobby containing pink and white wallpaper of silent film stars. Theater hard ticketed for “Paint Your Wagon” in 1969 road show.

It was twinned on June 13, 1973 and reopened with “Pat Garret and Billy the Kid” on both screens. Closed in the mid-1990’s when a large megaplex opened on Route 1.

From the 1970 annual report of Loew’s Theatres:

“Ever since the inauguration of the Loews theatre growth program in 1965, our selection of sites for new construction has closely followed the U.S. population’s demographic growth patterns. Emphasis has been on high-traffic locations, easily accessible by automobile.

“Typical of such properties is Loews Route 18 in East Brunswick, New Jersey, which opened on March 14, 1970. The Route 18 Theatre is situated in the Miracle Mall Shopping Plaza on busy Route 18 between Route 9 and the New Jersey Turnpike. Approximately one half million people live within a radius of 12 miles. This new theatre seats 1,115 and the parking lot accommodates 900 cars.”

The 1973 annual report discusses the twinning of this and many other Loew’s theatres.

The Loews Route 18 was not the same theater as the UA Turnpike Indoor. The latter theater was actually located in North Brunswick on Route 1 on the site of what is now the Wal-Mart shopping center.

The Loews Route 18 originally was a single theater located as one of the anchors of the Miracle Mall shopping center. If memory serves me, a Crazy Eddie’s occupied the other anchor location.

One of the interesting things of the old Loews Route 18 was the “wallpaper” located in the lobby area which had these huge images of Charlie Chaplin, Rudolph Valentino, Theda Bara and other silent era stars.

Another of the many theatres I was a projectionist. Worked here at various times between 1988 thru 1994. Huge twin, had almost 700 seats in each house. Nice big Cinemascope screens, even after twinning. I remember the summer of 1994 when “Forrest Gump” played in twin 1 to sold out shows for weeks. Theatre was equipped with 2 Simplex X-L projectors and 2 Christie Autowind 2 platters.

Worked here from 1988 to 1989. Cool place to be. Always had decent movies. I worked concession stand on the first day of Indiana Jones and the Last Crusade. What a crazy day.

Recall as a higher end/slightly pricier place…Saw Human Factor in 70s and Top Secret in 80s…go go bar called Talk of the Town was nearby.

This opened on March 4th, 1970. Grand opening ad with a drawing of the theatre can be found in the photo section.