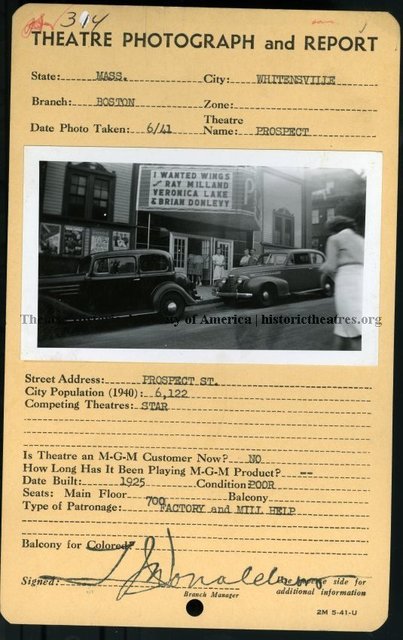 The Prospect Theatre is listed in the 1941 edition of Film Daily Yearbook as a 750-seat ‘Portable’ theatre. It was still listed in 1950, but no mention of it being portable. Information on this long-gone theatre in a town south of Worcester would be appreciated.

The theatre must go back to the World War I era or earlier. I found a 1918 listing for the place.

Barry Goodkin of THS sent me a list of Mass. Theatres many years ago.

For Whitinsville it lists:

There are MGM Theatre Photograph and Report forms for both the Prospect Theatre and the Star Theatre in Whitensville MA, with facade photos taken in June 1941. The Prospect was on Prospect St. and had a small triangle marquee with a large “P” at the apex. Attraction is “I Wanted Wings” with Ray Milland. The street appears to be on a slope. The Report states that the Prospect is not a MGM customer, that it was built about 1925, that it’s in Poor condition, and has 700 seats, all on one floor. The Star Theatre was on North Main St. It appears to be a free-standing building with center entrance and a small marquee. It has been showing MGM films for 3 years; was built about 1930, is in Fair condition and has 344 seats, all on one floor. The 1940 population of Whitensville was 6,122.

Both the Prospect and the Star theatres in Whitensville are listed in the 1927 edition of the Film Daily yearbook. The Prospect, with 792 seats, is open 4 days per week; while the Star, with 400 seats, is open 3 days a week.

The Prospect is listed as a portable theatre in the 1944 FDY.

I don’t know how the FDY defined a “portable theater” or what was meant by the term. One gets the impresson that it was a structure which could be dismantled in sections, transported elsewhere and re-erected. Looking at the (poor) photo of the Prospect Theatre on the MGM Theatre report, taken in June 1941, the building looks permanent. The front was on a rather steeply sloping street.