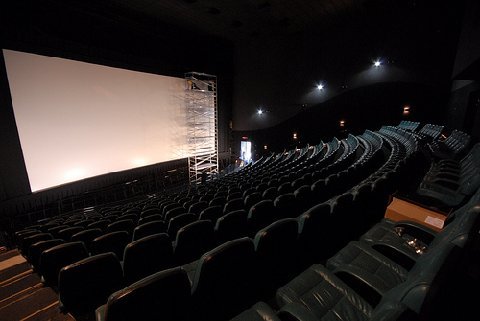 The Charleston IMAX Theater opened in June 2000 and showed a mix of educational films and feature films.

It closed suddenly in September 2007.

It was reopened as the Terrace Hippodrome Widescreen Theater on May 7, 2009, screening first run blockbuster movies on its giant screen. It was closed in 2013, and by late-2013 was being converted into office space.

The stars descended upon Charleston last night for the sold out premiere of the new film adaptation of Nicholas Sparks' best-selling novel, ‘Dear John.’ The red-carpet event was a fundraiser for Carolina Autism.

Downtown’s Hippodrome was packed to the gills with media, fans, and premier attendees dressed to impress for the exciting event. Stars Amanda Seyfried and Channing Tatum hit the soggy red carpet to greet a hoard of screaming fans who were posted up with signs, camera and love for the hot young actors. The energy level was a 10 the entire evening.

The Post and Courier has a nice write-up on Sunday night’s premier and NBC News 2 has a video overview of the night and interviews.

TheDigitel was there and we snagged a bunch of great photos of the stars, including some of 7-year-old Braeden Reed, a resident of Daniel Island.

We’ll have video of our interview with stars Amanda Seyfried and Channing Tatum up as soon as we can.

Another gem from Furlinger.. well worth the visit!

It is with great thanks and appreciation to our patrons that I would like to announce the sale of the Terrace Theater on James Island. For the last three years it has been our pleasure serving the Charleston movie going public. Over this time we have seen the theater grow to one of the most prominent movie theaters in the state. I feel the time is now right to pass the torch. John and I are please to introduce you the new owners Paul Brown and Barbara Tranter. Paul ,Barbara and there son Sam are relocating to Charleston to continue offering Charleston the best movie going experience possible. Both are accomplished film makers and movie theater operators. I trust the Terrace will be in good hands. Barbrara and Paul will continue the Terrace tradition.
John Brieger and I will continue to operate South Carolinas premiere first run cinema down town under the new name the Hippodrome. The Terrace and the Hippodrome will continue to work together on the Charleston Film Festival!
It has been a pleasure making the Terrace Theater the best movie theater in Charleston.We could have not done it without you , our loyal customers.

We have lots of new business ventures for Charleston to be announce in the near future..

Now used for private rentals only.

Theatre is being takin apart and will now be
office space ..

I just joined the website after seeing this thread while lookin up info as to why this theater closed. Such a pity, I remeber going to this theater as child before there first closure in 2007 and I loved it. My parents would take me and my sister there every once in a while to go watch documentaries. I remember the layout of the theater and the adjoining cafeteria was uniquely contemporary if my memory is correct. I saw my first nature documentary in this theater and I’ve loved nature documentaries ever since. The wharf where the theater was located was also beautiful back in the 2000s but as time has progressed a lot of the colorful stores that decorated the building are almost all gone if not entirely gone. The only thing left is the aquarium (which is very nice), ferries to the fort, and a open park area. I’m very fond of that wharf since I attribute some of my favorite childhood memories to it and the theater was the corner stone of it. Now it’s a fire house or something to do with local law enforcement if they’re even still there. It’s a shame that such a nice area had to go on a decline like it did, there’s almost nothing there anymore. Maybe one day someone will buy the place and make it something cool again. Sorry for the long post/first post.