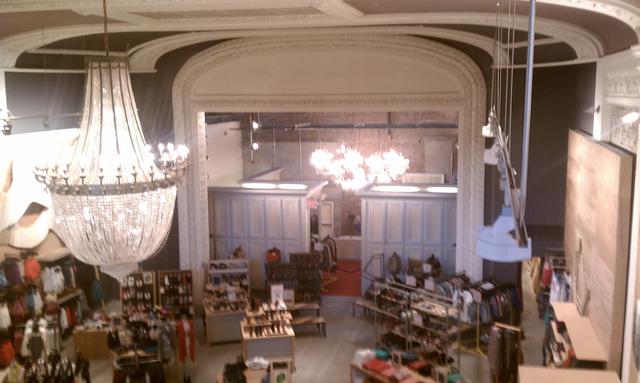 This old-vaudeville-house-turned-cinema, located a few blocks down King Street from the Riviera Theater, has had the most difficult time of Charleston’s historic theaters.

During the 1980’s, the theater was used for performances during Charleston’s famous Spoleto Festival and eventually transformed into a performing arts space.

The City of Charleston did not renew its lease of the theater in 2003, and despite efforts of the Friends of the Garden Theater, the theater was converted into retail space.

Thank you…I think! What a well written commentary except for the box label you found in the balcony. So sad that that age group would even consider walking in that store and buying something as if to say what you have done Urban Outfitters is okay with us! I recall reading on CT about a former theatre in Seattle that is now a Banana Republic so it would be interesting to read someone’s onsite commentary of that store, too. The exterior facade of the former Garden Theatre makes such a statement and I’m so disappointed that when I was in Charleston and drove by I didn’t realize what it had been so didn’t stop to investigate! The facade really made an impression with me and I knew that it had been something, but wasn’t even thinking of it having been a theatre as I had just visited the Riviera and the American so didn’t realize there had been another theatre nearby. BTW, when did Urban Outfitters come to Charleston and set up business? And if I had been there the day you stopped I would have had to control myself for wanting to make a remark about what used to be there at that King Street location!

Lost Memory: I just read your organ data for the former Garden Theatre. Does anyone know where it is now or if it still exists? John: Weight in if you have any additional information. Since you didn’t mention seeing an organ while at Urban Outfitters I assume there wasn’t one being played while shoppers were browsing like in Philadelphia at the former Wannamaker store. BTW, have you or anyone been to that location to hear the organ that is played? I met a young man 2 summers ago who has played that organ and he was so very proud of that fact and should be. He works for the Riviera Theatre in N. Tonawanda NY which was the hometown of Wurlitzer for many years. In the Riviera is the orginally restored Wurlitzer organ that was used as a demo to customers interested in purchasing one of the world’s finest organs! If I could I’d love to travel back in time and see all of the grand theatres of Lamb and Eberson and Rapp and Rapp of the 20’s in their prime and grand opening nights!

THANKS…SORRY ABOUT THAT …VERY COOL BUILDING

JOHN , WHAT CAN YOU TELL ME ABOUT THE AMERICAN THEATER ON KING

The American Theatre has been made into a two-screen theater with a nice bar in the former balcony. I was told there are plans to restore it to something like its 1942 appearance. I believe it will be used mostly for live theater performances. The theater has a web site at http://www.americantheater.com/

Urban Outfitters did a nice job in restoring most interesting architectural decorative elements of the Garden, and they have the money to control the periodic flooding in the basement.
I went to several (theater) performances at the Garden, the seating was abysmal. There wasn’t enough slope so you couldn’t see the stage properly, and the seats were all cramped together. The building was starting to look pretty shabby as well.
The Garden hadn’t shown movies in years and yes, it’s sad there’s no more movie theaters in downtown Charleston but the seating would’ve made this a lousy one.

To get an idea of what the Garden looked like, go to the Rylander Theater Americus, Georgia. C.K.Howell also designed the Rylander which opened a couple of years after the Garden. He used many of the same decorative elements in both theaters, The plaster work around the stage, the organ chambers and the grills in the ceilings. In the Garden, he has the dancing maidens above the organ grills, At the Rylander they are above the stage opening. Fortunately the Rylander has been restored(1999) and is in operation.