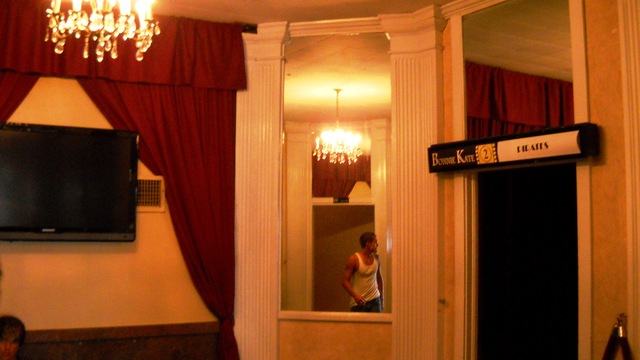 Quaint and distinctive little movie palace in this college town. The Bonnie Kate Theatre was opened May 16, 1926. It was twined in the 1970’s. By 1955 it was operated by the R.M. Kennedy chain. It was closed in November 2012 screening “The Twilight Saga:Breaking Dawn Part 2”. It was de-twinned in 2014 and became a live theatre venue and was closed in 2015.

I need to drive over and check out this one.

I may just do that Mike.

It is really remarkable to find a theatre which has been in continuous operation for 85 years and in such remarkable shape! Even though the auditorium has been reconfigured into a twin it is salvageable in that the original proscenium and backstage area remain intact although entomb behind a massive wall of sheetrock. [url=http://www.flickr.com/photos/maincourse/]Maincourse: Theatres[/url]

Hi Chuck, Mike & Jack, We are currently working on plans to take out the “massive wall of sheetrock”. We would appreciate any suggestions or advice. Thanks! Cindy

In April 2016, the City of Elizabethton was the highest bidder to acquire the Bonnie Kate.

Here’s its history at that point, shamelessly* copied from the Elizabethton Star:

The first owner was Mrs. Ollie Browning of Bluefield WV in 1926. She lived upstairs above the theater. …

The theater formally opened to a full house on July 4, with a christening by former Governor Alfred Taylor. …

In 1950, Bob Neal, who owned the Ritz Theater downtown, purchased the theater from the Browning family.

In 1962, Earl Bolling, owner and operator of the Stateline Drive-In bought it from Bob Neal. …

In 1973, Ray Glover began managing the theater with his wife, Jeanette, until 1989. Then, they sold it to Leroy and Agnes Policky, who operated it for 15 years.

During the 1970s, a massive sheetrock wall was built to twin the theater, allowing two movies to be shown simultaneously.

In 2004, Leroy Policky sold the theater to Brian and Cindy Higgs, who operated it till 2012.

Since then, it has been without an owner. (Huh? If it was abandoned, then why were folks bidding on it?)

Was there someone called Bonnie Kate?

Question…my father (89) grew up in Elizabethton, and remembers a small theater in the 700 block of East Elk, north side, near the monument. (East of the river.) Does anyone know what it was/what building housed it?

I just uploaded a pic of the Bonnie Kate from last October.