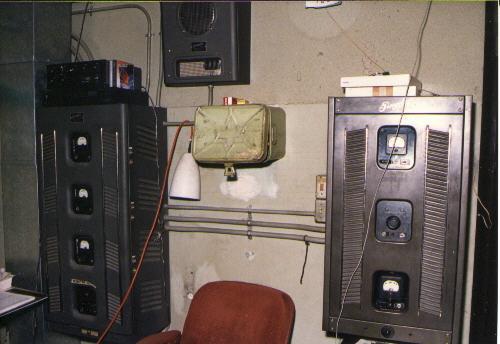 The State Theatre opened in 1949 and was first operated by Evergreen Theaters.

Constucted with stadium seating for 1,000 patrons, the former single screen theatre was triplexed in 1977, under Tom Moyer Luxury Theaters.

In 1983, the State Theatre became a second run theatre and later a dollar house before it closed in the late-1990’s.

In the spring of 1998, Harlequin Productions, a 501c (3) non-profit semi-professional theater company, purchased the building to be used for live theater, and began a $1.3 million dollar remodeling project.

The remodel created a level, semi-thrust sprung-floor stage with 220 seats set in a seven row amphitheater arrangement. The furthest seat is 40 feet from the stage. A system of catwalks over the stage and audience provides lighting positions of 23' to 27' above the stage floor. Located on an open Tech Deck at the back of the house are an audio board and fully equipped lighting system, which allows for a variety of lighting options as well as a quality sound system with an emphasis on playback. An electrical isolated ground system is in place at four locations: in the first house row, the back aisle of the house, backstage and on the Tech Deck. A system of 6" conduit runs under the audience and stage floor to assist with cabling needs. The stage is accessible by a 9' x 10' roll-up door with a 36" loading dock.

In 2003, further enhancements changed the audience seating area to 212 and added both costume and property storage areas to what was once the two additional movie auditoriums. While there is limited backstage space, there is a fully accessible dressing room and bathroom for artist use. Future plans (2005-2008) call for larger dressing rooms, 80 - 100 additional audience seats, upgraded audio equipment and acoustical enhancement.

I have a blowup of that full ad somewhere in my collection.

Having never been in the state does anyone have any photo’s of the interior before it was split up into 3 cinemas. And any of the way it is now?

Theater opened on Tuesday November 22, 1949. The theater manager at that time was Archie Zarewski.

Mr. G.K. Porterfield was one of the first projectionists at this theater.

Boxoffice magazine covered the opening in their December 3, 1949 issue:

May 6, 1950 issue of Boxoffice magazine profiles the theater’s seating, auditorium, and artwork on the walls.

I was just by the State the other day and the exterior is quite impressive! How was the theatre configured for the triplex-enclosed, split balcony with the main floor intact? Does any of the original interior ornamentation remain or was the interior gutted for the conversion to live performance? Something tells me the renovations were massive in that the seating went from 1000 to 212.

I can tell you as I worked there (1977 to 1990) how the tri-plexing was done. The theater was originally designed with stadium seating (no balcony). The back half of the auditorium was walled off from the main floor. Then the walled off section was split into two auditoriums of about 100 seats each. The main auditorium held 500 seats after the tri-plexing was done by Tom Moyer Luxury Theatres. From my brief look after it was converted into live theater, ALL of the interior of the auditorium was changed. You would not recognize the interior of the auditorium anymore from the way it originally opened in 1949. The lobby is still somewhat intact though.

Thanks! Would really love to see some pictures of the auditorium in its original state. The Box Office link is no longer functional.

In “The Olympian” newspaper today is a story about the managing director of the theater suddenly resigning: