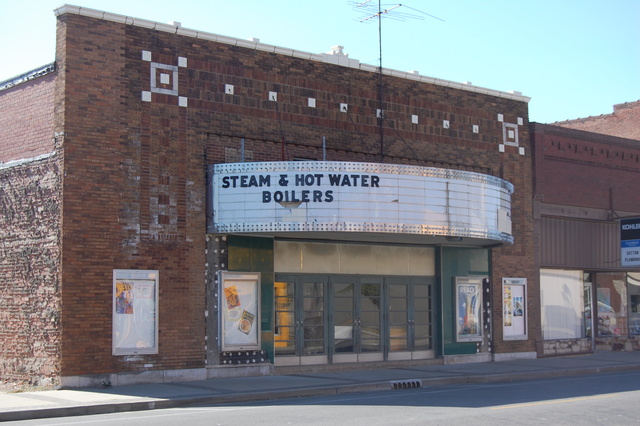 Kind of hard to put a style to that one.

An article in the June 28, 1965 issue of the Eldorado Daily Journal said that S. M. Farrar took over the Casino Theatre in 1909. In 1912, Farrar, O. L. Turner, W. T. Turner and others merged their various holdings and formed the Colonial Amusement Company. That company was supplemented by Turner and Farrar’s Egyptian Amusement Company in 1914, and both companies were consolidated into Turner-Farrar Theaters in 1945, by which time a succeeding generation of the families had taken over management of the company. Essentially, the Casino/Orpheum was controlled by Turner-Farrar as early as 1912.

A fire that led to the reconstruction of the Casino Theatre took place on April 6, 1927, and was reported by numerous newspapers around the region. The house was renamed the Orpheum when it was reopened. Another fire struck the Orpheum in 1928, as reported in the January 14 issue of the Decatur Herald, which said that the fire was the result of an incendiary device.

The style of the theater is less difficult to identify than kencmcintyre thought. The use of face brick to create a frame around the entrance is characteristic of the Prairie style, that offshoot of the Art Nouveau movement that flourished in the region around Chicago in the late 19th and early 20th centuries. The Casino was a rather plain example of the style, lacking the more intricate decoration used by such exponents as Louis Sullivan, Frank Lloyd Wright, or George Elmslie, but the influence is still obvious.

The asymmetry of the Orpheum’s facade is almost certainly the result of one of the post-fire rebuildings. The left sidewall must have been built out a few feet beyond its original location, but the decorative motif of the earlier frontage was not altered to accommodate the additional width. I’ve been unable to discover if the Prairie style facade was part of the 1917 expansion (which, come to think of it, might also have been when the side wall was moved outward,) or if it was part of the original, pre-1909 Casino. Pre-1909 is more likely, but 1917 is not out of the question.

The only theater listed at Eldorado (mis-entered as Elodrado) in the 1914-1915 American Motion Picture Directory is not listed by its name, but under the name of the manager as the “S. M. Farrar Theatre.” I have no doubt the house listed was the Casino, though.