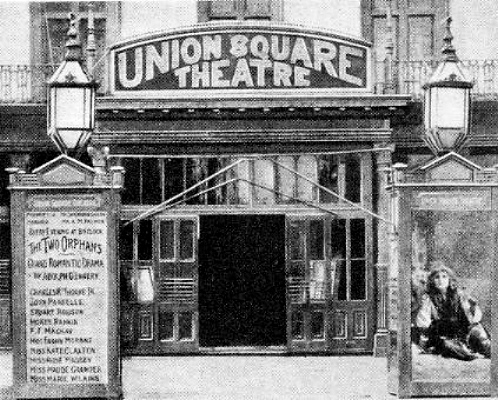 Built in 1870 as a variety theater called the Union Square Theatre. In 1893 Keith and Albee purchased the theatre for use as a vaudeville theatre. By the early-1900’s it was operated by Keith & Proctor’s until the partnership was dissolved in 1911. It became a movie house in 1908, known as the Bijou Dream Theatre

In 1921 the name was changed to the Acme Theatre. The Acme Theatre closed in 1936 following a period of years screening Russian films.

The Acme Theater was advertised in its later years as the only ‘American-Soviet Kino’, playing Russian movies. The address was 50 East 14th Street and the Film Daily Yearbook for 1926 give a seating capacity of 600. In the 1930 edition of F.D.Y. it is listed as having 597 seats.

The entire block bordered by 4th Avenue, Broadway, 13th, and 14th Streets had been cleared by the summer of ‘95; I remember passing by the then-boarded-off site at the time.

A 1908 NYT article names the Keith & Proctor on 23rd Street as being renamed Bijou Dream, not this one.

View link
This link is for 1905 story of fire at theater.

I seem to recall there being a really nice Marquee Magazine article on the Union Square back in the 80’s.

Here is a New York Times article on the theatre in the 1980’s:

There are some old pictures of the theater as the Union Square here on this web page well as some history: View link