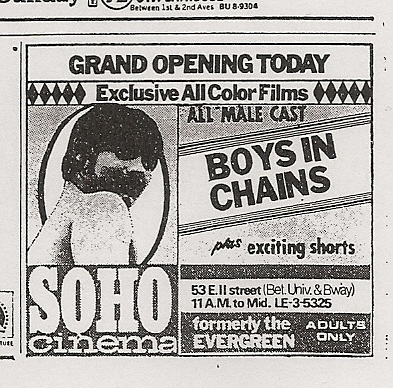 Opened in 1964 as an off-Broadway playhouse, known as the Renata Theatre. The owner Ozgur Zurer lived in an apartment above the theatre. It had simple clean lines in the auditorium, which is set back somewhat behind a long narrow lobby.

In 1976, the building was sold to the New York City Baha'i community and was converted into a house of worship, which has remained ever since. The auditorium was eventually named for John Birks ‘Dizzy’ Gillespie. Regular services are open to all, as are frequent concerts and other live performances that take place there.

Contributed by RobertR, David A. Litterer
Get Movie Tickets & Showtimes

I seem to remember an Evergreen Films distributorship from this period, theatrical and non-theatrical, specializing in off-beat product…associated with Evergreen Books, perhaps.

The 162 seat Evergreen started showing movies in early 1968 with FINNEGAN’S WAKE as an outlet for Grove Press Releases. It had previously run plays as the Renata. Its claim to fame was the opening of I AM CURIOUS (YELLOW) along with Cinema Rendezvous and it offered mail order reserved seats. The film played on and off for over a year. By 1970 Grove Press also moved into the Bleecker Street and temporarily renamed that the Evergreen Bleecker as well. It was caught up in a three cinema obscenity trial for showing the film CENSORSHIP IN DENMARK and by 1971 had reverted to live shows.

The premiere reserved seat venue for I AM CURIOUS (YELLOW) is now a church???

I just did a spit take all over my computer!

In keeping with “Yellow”, the Evergreen also showcased Godard’s Weekend. The theater was almost too intimate for that film.

Apparently it was the SOHO for a few months before it became the SOBO.

This became the Soho Cinema on April 23rd, 1971. Grand opening ad already up.