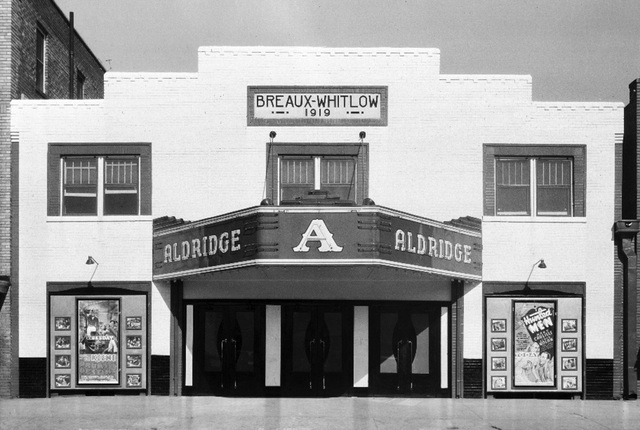 The Aldridge Theater was opened on February 2, 1920 with Sam De Grasse in “Blind Husbands”. It was an African-American theatre which initially presented vaudeville as well as movies. It was part of the TOBA chain of African American owned theatres In the late-1920’s Count Basie and Gonzelle White’s band played here. From the 1940’s thru the 1950’s it was a movie theatre having dropped live performances.

Direct links to the Aldridge Theatre page can be found here;
View link
and
View link

Historic photos of the old Aldridge Theater can be viewed on this informative web site,
http://www.roadsideoklahoma.com/node/575

The site where the Aldridge Theatre stood is now an apartment complex,
View link

For a rare auditorium look see go above to April 23, 2007 post and enter “ALDRIDGE THEATRE interior THE DUKE IS TOPS”

The Aldridge Theatre was slightly west of where the Haywood Building (Deep Deuce Grill) is today. Owned by Zelia Breaux and F.E. Withrow, the Aldridge opened in 1919. Big bands, vaudeville acts and movies were featured regularly. Music legends such as Cab Calloway, Billie Holiday, Count Basie and Duke Ellington appeared at the Aldridge.

I am looking for information or photographs of my great grandfather, Thomas Pierson, who was manager of the Aldridge Theater from 1918 to about 1922. If anyone can help, please contact me at Thanks.

Exterior pic of the Aldridge is very handsome. Neon and marquee is great. Art deco.

This one was built in 1919 but it opened on February 2, 1920. The feature film was “Blind Husbands” starring Sam De Grasse.