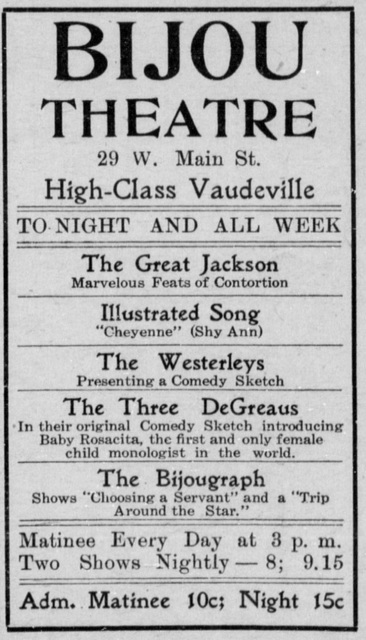 To attract a wide range of patrons the Bijou Theatre ran large display advertisements that promoted ladies' afternoon tea matinees, Saturday morning kiddie shows, Sunday afternoon inspirational programs, and five big vaudeville acts each and every night of the week. A tag at the bottom of every advertisement proudly stated that “The Bijou Theatre supports organized labor”.

Newspaper articles printed the sad news on November 24, 1906, that the Bijou Theatre had declaired bankruptcy and would be placed in receivership. All advertising abruptly ceased after January, 1907, and the Bijou Theatre remained dark for three years, until November 26, 1910, when the Bijou Theatre reopened for business as a combo movie/vaudeville house. However, only three short weeks passed before newspaper advertisements forever ceased.

Many factors could have contributed to the Bijou Theatre failure. Maybe it was due to an off the beaten path location, or stiff competition from powerful circuit houses down on Sheraton Avenue. Most likely the culprit was because, although acts were promoted as high class, they had no big names, which could spell disaster.

In 1915 the Strand Theatre opened on Main Street off Broadway. Possibly the Bijou Theatre and Strand Theatre utilized the same theatre structure, but this has not yet been proven.

Located on Sheridan (nee-Grand) Ave. & Harvey St. the Bijou Airdome was a sister house to the Bijou Theatre. The Bijou Airdome opened on May 13, 1906, as a rooftop, summer theatre. Advertisements show it was a two a day vaudeville venue.
Use the free search option of this web site to access further details,
http://www.newsok.com/theoklahoman/archives/

1906 pre-opening newspapaer announcements and ads list the Bijou Theatre as located at 29 East Main Street. If the Bijou truly was located on East Main, then it was placed in the middle of a warehouse district, which would certainly explain its failure.
Below is a 1910 panaramic photo of Oklahoma City, from Library of Congress. The Bijou Theatre would have been photo center, just this side of the Uneeda Biscuit warehouse.
View link

This ancient vaudeville house is intrigueing. If located at 29 East Main Street as those 1906 news notices say, that would explain the ads supporting unionized labor. At that location the Bijou Theatre Building is still standing today, covered over by a vaneer of perforated sheet metal. See a satellite view from the map feature above.
If it actually sat on West Main, it has been torn down. This old postcard shows where it would have been located at 29 W. Main, in the building above the letter K in the word Kingkade,
View link

Perhaps Bijou angels thought OKC’s entertainment district was going to grow East of the elevated tracks. It is only now doing so, a hundred years too late for the Bijou. Take a shorter route to the above mentioned L of C 1910 image,
View link

Bijou Theatre newspaper ads did give this vaudeville house a big build up. So, after I finally located a period postcard* view it came as quite a surprise to see just how modest the Bijou actually was. Located on the Northside of Main Street, about 50 yards East of Broadway, the Bijou facade was only a pink wood frame structure with an electric sign. Hopefully the auditorium upheld high expectation.

Further research uncover facts about the Bijou Thetre. It was sat on Main just East of Broadway.
On May 19, 1915, the Strand Theatre opened inside the former Bijou. Grand opera stage productions moved in on Oct. 28, 1917. Motion pictures returned in March, 1918, and lasted until the house closed forever in early 1920.

Postcard view of the old Bijou Theatre can be found on this site,
http://www.roadsideoklahoma.com/node/571

Taken in the early 1920s, this book cover image shows the already shuttered Bijou (AKA-Strand) Theatre (lower photo right). By then it had become some sort of business named New Bamboo, and its roof sign was being used to advertise a product called Cooks.
View link

A tinted picture of the Bijou Theatre can be seen on below link, type in
“bricktown main street east broadway"
View link