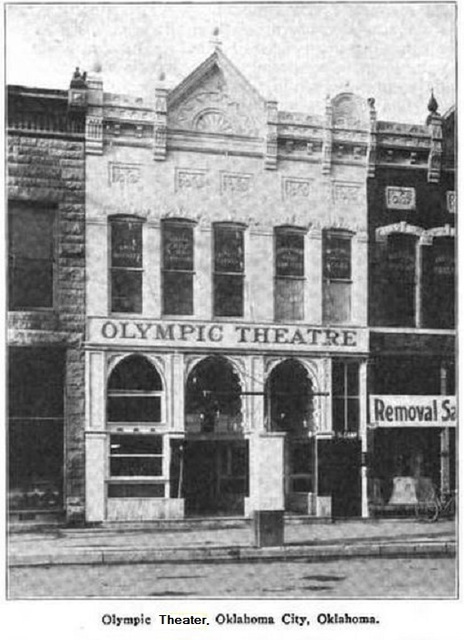 Located at 112 W. Main Street in downtown Oklahoma City, the Olympic Theatre opened in November 1908. It was renamed Strand Theatre from May 19, 1915, as a five cent cinema, but on rare occasions management would add to the program a vaudeville act or two.

On October 28, 1917, the Strand Theatre changed directions when it switched over to the staging of Grand Opera, at substantially higher prices. By March, 1918, the Strand Theatre had gone back to showing motion pictures, and remained a twenty cents a seat movie theatre until it closed in February 1920. During sweltering summer months the Strand Theatre advertisements had stressed that the interior provided mechanically chilled air, “cool breezes bathe your body in pure comfort”.

The entire block where this theatre sat (along with the Criterion, State, Rialto, Sooner, Majestic, and former Empire) were razed in 1972 to make way for a high rise Sheraton Hotel.
Films shown at the Academy X and Sooner were loops, more explicit than sexploitation. The Majestic specialized in booking documentary films centered around nudist colonies, or 3D sexploitation movies.
As early as 1943 other OKC downtown theatres, such as the Gem and Joy, presented T&A “adults only” films, though content would be considered soft core by todays standards.

An April 12, 1968, newspaper article reported that the old Mondo Adult Theatre would be renamed Academy Adult Mini Cinema located at 114 W. Mian St. It says seating capacity has been reduced to 150 for better comfort.

Type in word “Criterion” on below site and it will pull up a 1929 photo of that movie palace. Building next to the Criterion, photo left, was the former Olympic Theatre, by that time the space was being used as a cafe.
http://okhistory.cuadra.com/star/public.html

Newspaper research uncover facts about the checkered past of the Olympic Theatre. Grand opening occured November 10, 1908, featuring “Talking~Moving~Pictures”. Later The Olympic specialized in films produced by Humana Talking Pictures of NYC.
It was closed in mid 1919, just before United Artist started next door construction on their giant Criterion Theatre (Paramount had conrol by the time the Criterion opened). Reopened early 1967 as the Mondo Adult Theatre, a loop house. In April, 1968, it was renamed Academy X Cinema. Razed February, 1972

In reference to above comments, almost all OKC downtown theatres, and other fine buildings, were torn down for a dream city that was never to be. This tells all -
View link

In this 1929 photo, the former Olympia Theatre can be seen left of the Criterion Theatre. At that time is was being used as the Dainty Lunch Counter, with the slogan “All our cooks are mothers”.
View link