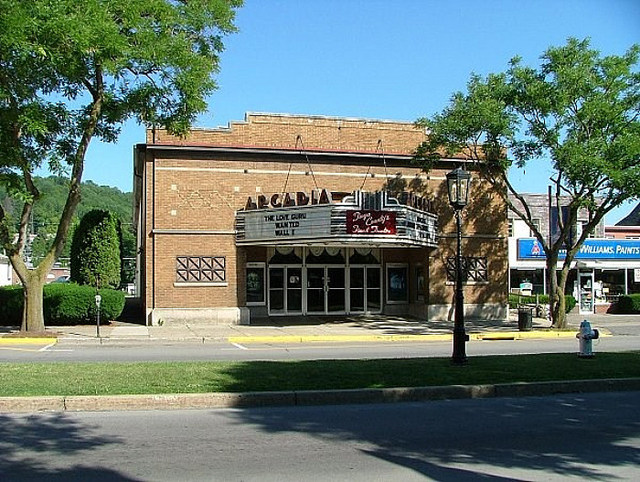 They really did a hatchet job when they cut this wonderful theatre into four screens. Typical of what happened to many theatres int eh 1970’s. One of the auditoriums doesn’t even have fixed seats so they can move the seats for stage presentations and some sort of dinner theatre and I am not even sure why they bother with movies in that auditorium.

Well at least they preseved the exterior and the marguee.

I must disagree with the negative comment regarding “hatchet job.” The restoration of the space and the mix of larger and smaller screens was handled very well. Prior to the remodeling the theatre was a dying, dilapidated cavern. In a time of multiple releases and varying tastes it made no sense for the only theatre in the county to remain as a single screen theatre. The largest screen is vastly better and larger than the mall chop shops. The second largest screen/stage with moveable chairs is attractive, comfortable and flexible (yes, horrors it also allows for live theatre – a nice plus for a rural community). The smallest theatre is not very big at all but the limited seating prevents the screen from seeming too small. The interior of the Arcadia is tasteful and rich looking. I’d rather go here than any theatre within 100 miles. The prices are also better than the mall experience.

Here is part of an article in the Wellsboro Gazette dated 3/26/97:

Hollywood stars â€" both past and present â€" came to Wellsboro for the gala reopening of the Arcadia Theatre on Friday night, March 21. As darkness settled on the town of 4,000, a good percentage of that number gathered on the boulevards and outside the Main Street theater to witness the festivities. Brothers John and Jim Dunham arrived at the ribbon, a combination of white ribbon and black film, for the ribbon-cutting ceremony along with state Rep. Matthew E. Baker and Wellsboro Mayor R. Robert DeCamp.

“People wonder why did this happen,” said DeCamp. “It happened because of people like John and Jim Dunham.” The pair had the courage of their convictions to forge ahead with plans to rehabilitate the 75-year-old theater, said DeCamp. They also had the faith that if they completed this project, the people of Tioga County would utilize the first-run movie house. Baker clipped the ribbon, and the star-studded procession began. Classic cars and limousines pulled up to the curb to discharge their tuxedo-clad and sequin-decorated occupants.

The former theater has undergone a transformation since it was closed last October for a conversion to a four-screen complex. The walls are now covered with a dark green faux marble wallpaper decorated with scrollwork border along the top. Floors are covered with a rich green and red patterned covering. The walls have returned to some of their former glory with the decorative scrollwork rectangle in off-white contrasting against a dark green background with highlights of ruby red and gold.

I can’t find the dates of either issue of the journal, but the Roberts project was earlier in the Google Books scan, so it was probably the first announced. It’s possible that the Arcadia Theatre Company arranged to abandon their project and take over the Roberts project instead, as it might have been farther along. Perhaps the Arcadia project announcement was even a ploy to force Roberts into a deal to turn over operation of his new house to the other group.

In any case, the architect of the Arcadia Theatre was probably either H. M. Haskell of Elmira or H. Spann of Buffalo. Henry L. Spann was the architect of several theaters in Buffalo, but I’ve been unable to find anything about H. M. Haskell other than a couple of directory listings. Maybe somebody with access to records in Wellsboro can clear up the mystery.

Just learned of this theatre after greeting the Fireball Run folks and their cars enroute from Western NYS to Wellsboro PA. Too bad it was remodeled to 4 screens in 1997.

Mentioned in today’s Sunday, Philadelphia Inquirer, in article re Coronavirus- B section- The Region- headline Code Yellow, BACK TO LIFE: In tiny town, reconnecting after the shutdown. “The art deco Arcadia Theatre, visible through the cafe window at Dunham’s has no timetable for reopening.” Dunhams is mentioned as a department store and adjacent hardware store. There’s a photo of Nancy Dunham.