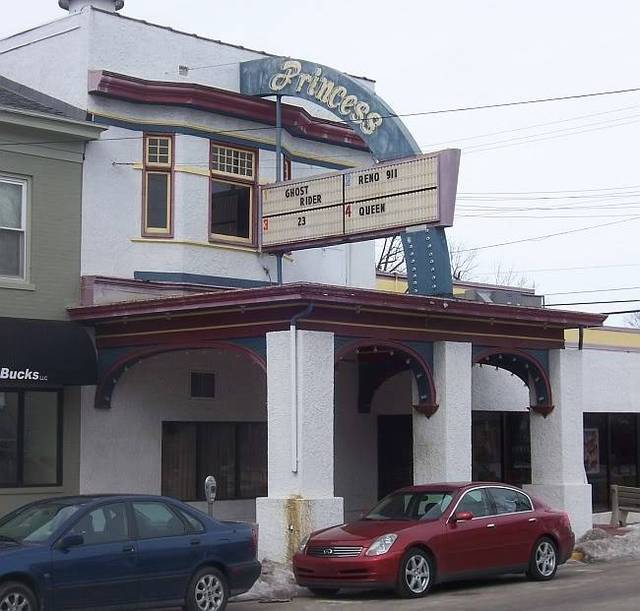 The Oxford Theatre was opened September 11, 1911. In 1950 it was renamed Talawanda Theatre. It was enlarged and renamed Princess Theatre in the 1980’s.

The Princess Theatre’s marquee lights up the streets of the quaint small college town of Oxford. The theatre has four screens and showed first run movies. It was closed after a fire damaged the building in 2014 and was demolished.

Does anyone know what year this theatre was built?

I am amazed how some of these theatres look nothing like a movie house.Thanks for the picture.

Closed down in 2012 when Regal took over Great Escape but reopened during 2013.

Many, many memories of the Talawanda in 1962, after seeing a movie would go to English class with Dr. Weigel who would tell us that the movie we saw had sexual symbols and that just shocked us. WHO KNEW?

A brochure for a walking tour of Oxford’s uptown business district (large PDF file) says that the Princess Theatre was built in 1911 and opened as the Oxford Theatre. It became the Talawanda Theatre in 1950, and was enlarged and renamed the Princess in the 1980s.

This January 25, 2015, article in the Journal-News says that plans are afoot to build a new building for the theaters on a lot adjacent to the Princess and incorporate the facade of the existing Arts and Crafts style building as the entrance to the new theaters, but the plans have not yet been approved. I haven’t found any more recent articles about the proposal.

The Princess was demolished in 2015 after being damaged in a fire that started in an ice machine.
http://miamistudent.net/?p=17012536

Curtains close on Princess Theatre (Oct. 2, 2015) By Audrey Davis, For The Miami Student

Just a few days ago, the shelves at the Princess Theatre were still stocked with candy. A batch of popcorn, though stale and old, was still piled in the machine, ready to be eaten — even though the theatre had been closed for well over a year. Before the demolition began Monday, the historic Princess had been around for over a century. It was first opened Sept. 11, 1911 and was originally called the New Oxford Theatre. From its opening to its demolition this week, the theatre went through several ownerships and two additional name changes. It wasn’t until 1982 the theatre got the name it is known by today.

While it was called the Talawanda Theatre, Angela Provines, a Miami alumna (’75), recalls spending many evenings there. “Many professors and their families would attend movies there,” Provines said. “It was weird to see them out of the classroom and being ‘real people.’”

An ad for the New Oxford Theatre was featured in a 1938 edition of The Miami Student, promoting ticket prices at only 10 cents for children and 25 cents for adults. Students used to be given discounted prices if they brought their college IDs. Provines said because of this, the theatre was usually packed, especially on Saturday nights.

The theatre had always been known for its cheap ticket prices, making it a great hangout spot for Oxford’s younger population, like first-year Phoebe Myers. Myers has lived in Oxford her whole life. She had been watching shows at the Princess Theatre for as long as she can remember. She recalls the day she was allowed to go to the theatre without her parents, when she was 11 years old — a monumental moment. The theatre, she said, was a large part of her childhood and teenage years. “Freshman year of high school, all of the English classes read the Hunger Games,” Myers said. “One day we all walked from the old high school to the Princess to watch the movie, and that was just a really great memory.”

Senior Jillian Runser also remembers watching the same movie at the theater. “My sophomore year we got free tickets to see the Hunger Games premiere there,” Runser said. “It was just a bunch of girls from my corridor freaking out about it, so it was a lot of fun.”

In the past few years, the theatre has closed and reopened several times. In 2014, not long after it had been renovated, the Princess caught fire from an overheated ice machine. Although the theatre was not open at the time and no one was hurt, it was shut down due to smoke damage and has remained closed since. “It was just a really good place to go if you wanted an alternative to going out to bars or just hang out with your friends and relax and forget about what was going on around you,” Runser said.

The theater has been missed in the town since its indefinite closing. Myers said younger kids, especially, have lost something that gave them a sense of freedom. “It was part of the town’s identity,” Myers said. “It just fit with Oxford.”

It is still possible, though increasingly unlikely, that the Princess Theatre will come back to life in a new building. This article posted to the Oxford Patch on May 18, 2018, says that the construction of a new Princess Theatre building took place in 2015, but that the ground floor, intended as a location for the theater, remains incomplete. If financing to finish the theater cannot be found the owner of the building is likely to lease the space for some other use.